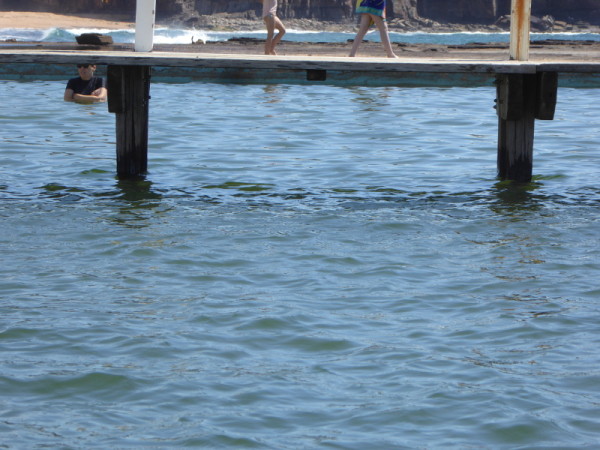 Narrabeen beach gets a mention in a Beach Boys song…

North Narrabeen rock pool is something of an icon among Sydney’s regular rock pool swimmers, and it’s easy to see why.

The 50m laned pool is separated from the rest of the pool area by a wooden boardwalk which has apparently been there since the pool was built in the 1930s. I think you can swim under the boardwalk to get from the general swimming area to the main pool, though nobody seemed to be doing that and there was a bit of segregation between the ‘serious’ lap swimmers in the 50m section and the ‘fun’ swimmers in the other bit.

This was my first swim after a 4 week layoff so I stopped after 10 laps, but was pleased to manage that without any discomfort from any of the niggling injuries I’ve had through most of last year.

The pool apparently gets cleaned once a week in summer, and I think it was due for a flush out as there was a fair bit of algae building up in the amazingly warm water. No easy steps or ramp into the Olympic size pool here; it’s a case of clambering down the slightly slippery, vertical metal stairs or diving straight in. The pool is a good depth at both ends, though, with water up to my chest, and there’s lots of little silvery fish swimming about with you throughout.

With the campground just nearby and this being summer holidays, there were lots of families in the pool today, though mostly in the general swimming area and there was plenty of room left in the laned section, with a whole lane to myself the whole time. Having said that, once I get my head down to do freestyle or when I’m on my back looking up at the blue sky, it’s hard to stick to one lane and as usual I deviated from the straight and narrow constantly, but only once did I come close to another’s swinging arms as they paced in the other direction.

I’d love to come back at high tide. The water was far out throughout my swim today, though you can pause to watch the surfers glide past on any tide. The sand near the pool was wet so the waves must come right round the pool at some points in the tidal cycle. This is a pool I’ll try to come back to so I can experience it also on a lively day at high tide. Has anyone been in on a day like that??

There is a ramp into the main pool by the cliff face, but then you’d need to swim under the boardwalk to access the lap pool. If you want to get straight into the main 50m pool, the only options are to jump/dive in or take the vertical metallic stairs. These are quite slippery so take care getting out too or your leg might slip right through.

There are showers by the cliff at the pool side, and changing rooms with toilets just a few metres back from there. The building is open from dawn to dusk.

I was in the water at low tide – I have not yet seen Narrabeen Rock Pool during high tide or a storm swell, but will amend this when I have…

Pool cleaned weekly in summer, though check Pittwater Council website for details (it’s usually drained around 10pm on a Tuesday and filled again on the next high tide, so you might want also to check your tide times!)

The pool was built under the Unemployment Relief scheme in the 1930s. The wooden boardwalk was an original feature of the pool and is still there today. The baths were officially opened in March 1934 having been built by Warringah Council at a cost of £494!

The Narrabeen Nippers meet every Sunday through summer with a carnival every January (and the parents all go for coffee afterwards, it seems, so keep an eye on the time if you fancy a cuppa after your swim at the coffee shop listed below).

The Shivering Sharks are a hardy group who swim throughout the winter in the rock pool. They organise an annual competition among local sports clubs and groups to swim 10 lengths of the pool without a wetsuit. The competition is named after a Charlie Hardy, who swam in the pool regularly until his death at the age of 89.

This was my 66th pool on this journey, and it was almost 66 years ago to the day that a cyclone hit the area, causing untold damage and deaths. Press reports at the time speak of six men being washed over the railings of the pool into the ocean by huge waves; they were all rescued thankfully.

This is one of the favourite pools for Sydney Kids swimming blogger Seana, who wrote about it in 2014

It’s a ten minute walk to a cluster of coffee shops in Ocean Street. I liked the look of: 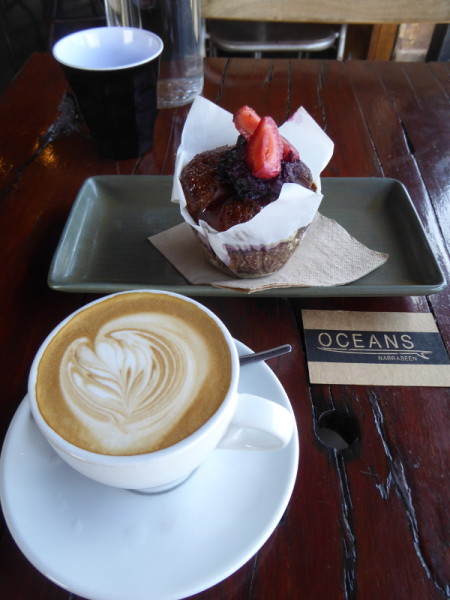 I like the décor of this coffee shop over the road from the beach at North Narrabeen. They have quirky touches like the wooden surfboard hanging from the ceiling with light bulbs in it; there are decorative skateboards on the wall of the restaurant section; and a generally airy fresh feel to the place overall. There’s the rather good Allpress coffee on offer, or loose leaf teas from Tea Drop if that’s your choice, and then there are the home baked muffins (mixed berry or chocolate when I was here), so popular that the staff don’t mind if a couple are left at the end of the day because then they get to take them home themselves. There are gluten free options too. The place gets busiest on Sunday’s after the North Narrabeen Nippers have finished their sessions at the rock pool, so if you want to avoid a crowd, you might try to get in there early on Sundays in summer. To get back to Pittwater Road for your bus back to the Sydney CBD, take the Pelican Path between the (private) camp ground and the lagoon.