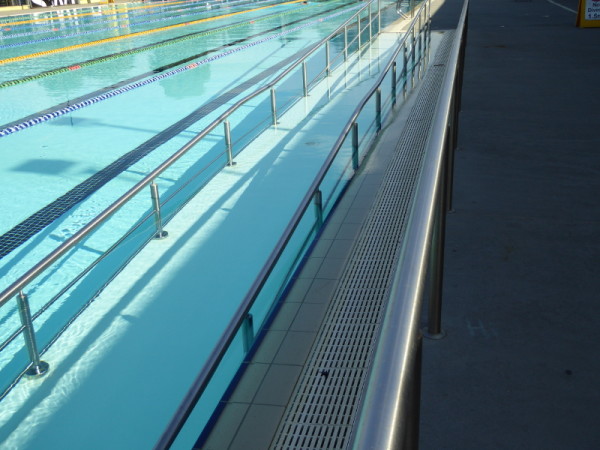 After my unsuccessful attempt to swim in Enfield Olympic Pool last week (closed till October), I was pleased to get back into the water at Birrong Leisure Centre’s wonderful Olympic Pool, which stays open all year round.

This pool is either a fairly modern build (maybe 1960s or 1970s judging by the architecture of the entrance) or has undergone some major facelift in recent years (or maybe both), with its Spray Park something of a novelty for outdoor pools round Sydney and its excellent disabled ramp.

Access to the pool for able bodied swimmers is slightly unorthodox, though. There are vertical metal steps into the water at the 2m deep end and half way down the 50m pool, but no steps at the shallow end. It was only when I wanted to get out of the water that I saw there were those shallow steps built into the pool wall underwater to help you get out, but these are not much use for getting into the water, and quite hard to use for getting out without the handrail. I felt like a clumsy walrus as I bellyflopped back on dry land after my 20 laps.

On a midweek morning in winter, even in bright sunshine, there were only a handful of swimmers in the water with me in this 8-lane pool, so ample scope for me to fit in a few backstroke lengths in between my freestyle.

>Unlike many Australian outdoor pools, there isn’t much to feast the eyes on while you do your backstroke at Birrong pool, though. The trees in the nearby park are not quite tall enough to be visible from the water, and at the other end there is an electricity sub-station, though no sense of sparks flying overhead as you do your laps…

The water was a good temperature, though, and they say it has a lower chlorine level than many freshwater pools, so that felt quite pleasant to swim in. It also had that water level just lapping over the sides of the pool, which makes for fewer waves and an easier swim.

My fellow swimmers were all ethnic Chinese, and judging by the conversations I overheard with the lifeguards, their English was not up to much, so I didn’t really try to strike up a conversation with any.

I was struck, though, by the fact that there is an information board in Arabic but none in Chinese. When I asked the lifeguard about this, he said that interestingly the Chinese are enthusiastic swimmers all year round, but the Arab communities locally tend only to swim in summer. Fascinating observation, and maybe something Bankstown Council could think about when deciding which languages to use for pool signage?

My tour of Sydney’s outdoor swimming spots has opened my eyes to the enormous numbers of Chinese now living in Sydney. It’s a tough community to connect with, for various linguistic and cultural reasons, but somehow swimming feels like a potential bridge and I do love their passion for getting into the water whatever the weather and whatever the air temperature (a bit like me in that respect).

By train you can get off at either Birrong or Regents Park. The latter is slightly nearer and a better spot to go for coffee after your swim, but there are fewer trains than at Birrong. There is not a lot in Birrong itself, unless I went down the wrong streets.

Disabled access good with excellent gradual sloping ramp into the shallow end. Slightly odd access if able-bodied as you need to drop or jump in at the shallow end or take the steps at the deep end…or use that disabled ramp.

Big cavernous changing rooms. 20c for a shower with warm water, though the warm didn’t last long for me so lather up quick and rinse off asap unless you like it cold in winter. Also beware of the strange gulley against the wall for water to flow away. I stumbled at one point and could easily have sprained my ankle in the process. But please don’t take this as a call for stronger health & safety regs here. The showers are fine and I was just clumsy.

Pool open all year round

8 lane 50m pool plus Spray Park and indoor pool at the Leisure Centre.

Shane Gould swam a 1500m world record at Birrong Olympic Pool back in 1971. One of the lifeguards at the leisure centre told me one of the 2016 Australian Olympic swimming squad began training at Birrong so the pool so brings in some top swimmers even today.

When it opened in early 1962, Birrong Olympic Pool was billed as the most modern in the southern hemisphere, with its glass watchtower for lifeguards to keep an eye on things in the water, and modern filtering systems plus fluorescent lights underwater to help night swimmers.

The idea back in 1962 was to match the ‘lavish American pools’ being designed around the same time, according to an article I found on the wonderful Trove website from local newspaper The Biz in September 1961.

The Lazy Swimmer blogger came to Birrong Pool and wrote about it in 2009.

The coffee I liked near Birrong pool was a bit of a hike along the pipeline, but it’s now closed down anyway, so who has a good tip for coffee in Birrong or nearby?