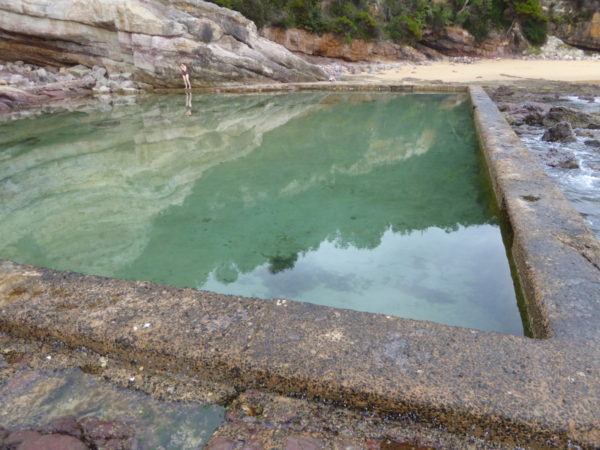 A swim among the fish in the clear waters of Aslings Beach Rock Pool at Eden started our day off perfectly, with an audience of black crabs looking on from every wall and crevice along the sides of the pool. This must be one of my favourite ocean pools yet, for the setting as much as the pool itself.

As NSW ocean pools go, Aslings Beach rock pool is a relative newbie, having been built only in the 1960s. It doesn’t always get the best reviews, either from locals who find it fills too easily with sand for serious lap swimming or from other rock pool enthusiasts who apparently find it also gets a lot of seaweed in it after heavy seas.

But we loved the place.

It sits right at the southern end of Eden’s beautiful Aslings beach. It’s a bit of a scramble to get in, clambering over a few rocks to reach the pool wall, and then trying to work out the best way into (and later out of) the water. I was grateful for my pool shoes, I have to say.

It looks as if you might get wet feet even approaching the pool on a high tide, as the sand was firm and damp right up to the cliff base by the pool, though the local Dad we spoke to reckoned you could always access the pool except in a storm.

There’s something majestic about the rock formations just by the pool at Aslings. The pinkish striated rocks seem to have the form of an almost skeletal face looking up at the sky, and we both reckoned this place must have had some spiritual significance going back a good deal longer than the 45 years of the rock pool.

Around the pool itself, there are hundreds of crabs (plus some pretty impressive sea slugs in the smaller rock pools around the edge of the ocean pool): a whole family of different sized crabs scuttled away as I walked around the pool perimeter, and most of them seemed to enjoy keeping an eye on us as we swam later on.

In the water, it was just perfect. Clear and cool, with hundreds of little fish darting about.

Sand has silted up the pool a fair bit, though it was quite possible to swim a good lap (about 25m I reckon) along the ocean-side wall, and in that respect was much better than Macmasters up on the Central Coast, where the swimmable channel was much much narrower and the water much murkier.

On the Saturday afternoon in Eden, we chatted to a local family at Aslings Rock Pool, and it was great to see Dad with his two daughters just enjoying both the pool itself and the excitement of fossicking around in the smaller rock pools around the ocean pool. We could see from how the 10 year old managed to wade comfortably in the water that it was not so deep, but perfectly adequate for swimming if you find the right spots.

By the Sunday morning, we were the only people in or around the pool, which always adds to the magic of a place like this.

It was a relaxing walk back along the beach to the car park and showers, along the fantastic sands of Aslings Beach (such perfect texture and firmness to the sands there), and then back into town for a final cuppa before we motored on home.

We’d both been to Eden before several times but always passing through. When I came as a 7 year old, Aslings Beach Rock Pool was not even built!

This was the first time either of us had spent more than one night here. And we’ll certainly do it again. For swimming enthusiasts or lovers of rock pools, Eden is an absolute Must.

There are buses right down the coast from Sydney’s Central Station, but they take a while! We drove down to Aslings Beach from the centre of Eden and walked the few hundred metres along the sand to the rock pool at the southern end.

It took us a while to work out the best entrance and exit point from Aslings Beach Rock Pool. We ended up sliding in off the pool wall on the ocean side as the water seemed deeper there and the bottom of the pool looked soft and sandy. We exited by wading up to the other end and picking a not-so-slippery route out over the rocks (and via the crabs, though they pace the pool walls all round really).

There are no facilities at the pool itself. But public toilets can be found back by the road side (opposite the cemetery), and look carefully and you’ll see the very old pipes that arc down from the roof of the toilet block. These are the showers, and very nice they were too, though it felt a bit like a makeshift shower from some edition of MASH about the time the pool was built.

The pool can be accessed on all tides, though it looked as if the water might lap around your ankles as you approach the pool at high tide, and that was on a calm day, so I imagine in a storm, Aslings Beach Rock Pool could be quite hard to reach.

It also quickly fills with sand and seaweed so you won’t always get a good swim here, but try the channel up by the ocean side for deepest water.

I haven’t found any archive articles about the history of the Aslings Beach Rock Pool. It appears to have been a more modern build – 1960s or 1970s according to different sources. If anyone has any good stories relating to the rock pool here, please share them below under comments…

We were down at this rock pool twice during our stay in Eden. When we swam here, there was nobody else around. A luxury pool to ourselves! But on the Saturday afternoon we bumped into a family messing about in the pool and on the rocks all around. They were from up our way near Kiama, but had moved down to the Sapphire Coast and loved having this coastline – and these rock pools – on their doorstep.

The only other ocean pool writer I have found to have visited Eden’s Aslings Beach Rock Pool is on the excellent All Into Oceans Pools website.

I don’t usually add links to photographer websites but in the case of this photography blog, I thought the Aslings Beach Rock Pool photo was worth a link.

Go back up to the centre of town for coffee in Eden. This place is good for coffee and tea (and they even do a Devonshire Cream Tea if you get here early enough in the afternoons…)

Cuppaz get their coffee all the way down from Byron Bay, and for us it was the best coffee in Eden. We also went back for breakfast there on the Sunday morning, when we tried their loose leaf tea, which gave us a really good kick-start to the day. We mistimed our return for afternoon tea as they close quite early at the weekends, but the scones and jam looked delicious. You can see why this is a popular place with locals – just a shame they don’t open a bit longer for summer visitors like us!