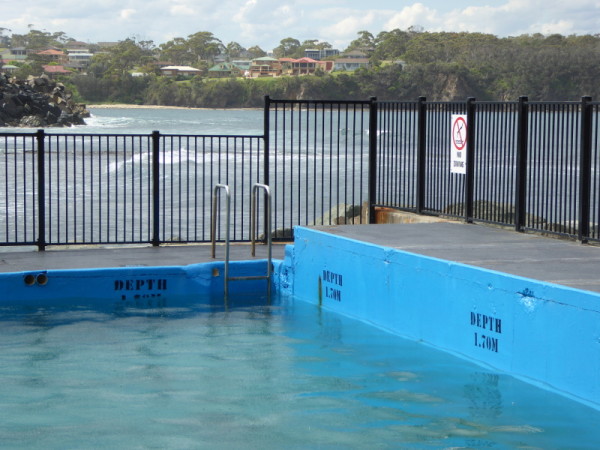 It took me three visits to Ulladulla to actually get into the water in the sea pool. The pool only opens from November to April (and it’s closed for a weekly clean on Tuesdays so beware of that too). We didn’t read the small print well enough when we first dropped by in September, and trusted to local knowledge, following the advice of a gent who advised us to come back after the long October weekend (he must have been confusing it with the Ulladulla Leisure Centre outdoor pool, which opens a month earlier than this sea pool).

Of course, I blame the compensation culture that has engulfed much of western society for the closure of pools like this over winter. Apparently, in 2001, the Shoalhaven Council risk assessors reckoned it was not safe to leave the pool unattended, so they began with lifeguards and then built the health & safety fence around this pool (and the one at Huskisson), meaning it gets drained and locked for 7 months of the year, whereas every other ocean pool I have visited in NSW (apart from Shoalhaven’s other pool) has no such restriction on swimming through the winter months – in fact, many of the swimming clubs at these ocean pools only get going through the winter.

This is a lovely pool, too. Much nicer, in my view, than the one up the coast at Huskisson. This might be because I was completely alone while I did my laps, but it also felt cleaner and generally deeper.

It’s a 50m Olympic pool, painted blue with lane markings so great for keeping a straight line in freestyle. Pool depth goes from 1.1m at the shallow end to about 1.7m in the deep.

There are wonderful harbour views from the pool, looking back to the bay and harbour at Ulladulla, and if you get really lucky, you might even spot a pod or two of dolphins having fun in the bay right by the pool.

It’s an idyllic spot, even on a day when storms were breaking out over the area, and I just managed a quick few laps in between showers – I was clearly lucky there were no health & safety officers on hand to warn me out of the water if they heard distant thunder (as has actually happened to me once in the USA – the birthplace of the compensation culture, of course).

There’s space for a few cars to park just about 50m from the pool back at the fishing port, or plenty of parking a little further back in town. The pool is to the south of the main fishing harbour in Ulladulla.

Nice steps to get in at the shallow end. The more traditional metal stairs at the deep end and three quarters of the way up the lap.

There’s a shaded are where you can leave your things at the shallow end within the health & safety fence, but I couldn’t find any showers anywhere (if anyone knows where a shower might be, do please let me know by commenting on the blog). The toilets in the area just inland from the pool have a small changing area but no showers inside.

I have seen no major differences in the tides here. The pool walls are raised and there are rocks to protect the deep end from oncoming waves, though I’ve no doubt in a storm swell the pool will get a fair bit of spray, and in a discussion on Facebook I saw that one person remembers a small shark being washed into the pool one day some time ago…

If planning on travelling here for a swim, just check those opening dates and avoid Tuesdays when the pool is closed for cleaning.

Ulladulla Pool was built in the 1950s and opened in 1959, just after my birthday apparently!

There is the outline of what looks like an old rock pool just to the north of the sea pool, but I have seen mixed views on whether this was in fact a former rock pool in Ulladulla or just part of the 19th century quarry that used to be here. Again, if any local historian knows anything else on that, I’d love to hear from them…

By the time I got into the water I was completely alone, but I did briefly cross paths with a local couple who were on their fourth swim in the five days since the pool reopened for summer. The water was a little cold, they said, but these things are relative and it felt a great temperature to me, even in the rain that began just as I was getting out.

Just five minutes’ walk back to the best coffee shop in Ulladulla, with wonderful harbour views: 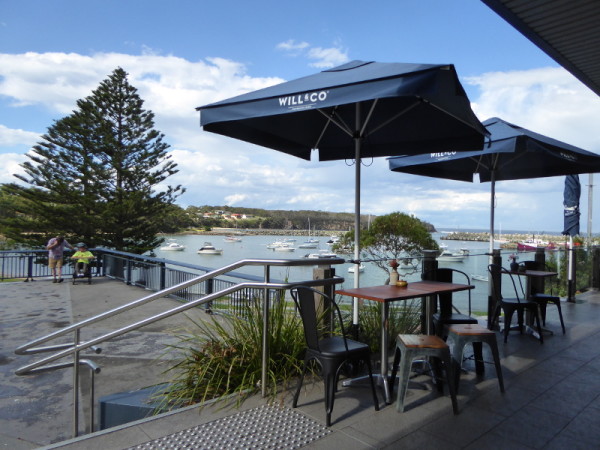 This is a top spot for coffee in Ulladulla but they also do great loose leaf teas, and one of the nicest banana bread-types I have ever eaten. Add to that the friendly service and the great views out over Ulladulla Harbour and you can’t beat this place for a post-swim cuppa. Coffees are from Will & Co, based in Bondi – there are excellent single origins as well as a very good house blend made for Native, and I rather liked the porcelain takeaway-looking cups. Teas are from the rather tasty Mayde Tea company in Byron Bay, so these guys have looked far and wide to source quality for you. And don’t miss the date and almond bread – absolutely delicious and beautifully-presented.