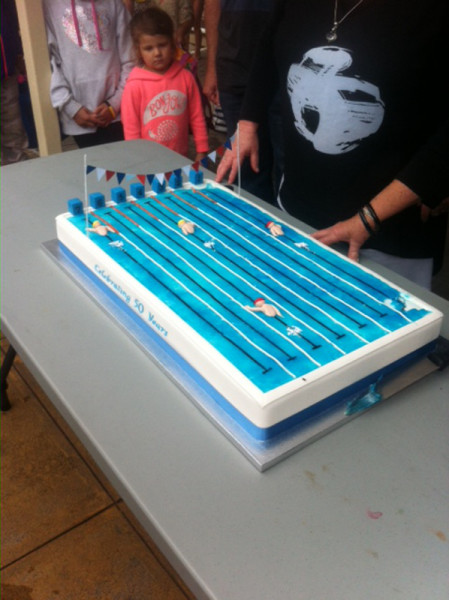 My experience at the pool

I couldn’t resist returning to Oak Flats Pool at the weekend when I heard that Shellharbour City Council were organising a bit of birthday bash to mark the 50 years since Oak Flats Pool opened.

The weather wasn’t particularly kind to the organisers, with many probably put off by the soaking rain that fell through most of the morning. But by the time I arrived at the pool around 1pm, it had dried up enough for quite a crowd to be there; probably not as busy as it was in the early years of the 1960s, but there must have been a  good 50-100 people either in the water or in the queue for cake and sausages…

The cake was the star attraction, to be honest. A bakery in Wollongong had put together a fabulous Olympic Pool sponge, with lanes and lap swimmers in an amazing swimming pool blue (and it tasted as good as it looked). There were probably more kids queuing for cake than there were in the water, but hey, as long as they didn’t jump in on a full stomach, who cares? It was all part of the fun of the day.

Shellharbour’s Mayor was there to cut the cake and acknowledge the central place of the pool in the local community. Alongside her was Helen, who had taught the Mayor’s kids and probably thousands of others in that very pool over the last 46 years.

But Hugh was the guy I enjoyed talking to most on Saturday. He’d been there on the day the pool opened and had brought his 8-year-old grandson for the Oak Flats birthday party.

He spoke of the line of trees that used to run alongside the pool length, of the old rim to the pool that people used to use as arm rests until too many of them got their arms stuck, and they were replaced by the new safer design (in one of the pics in the gallery), and of the slippery pool entrance where many an unsuspecting newcomer would come a cropper before even getting into the pool (now also made safer, of course).

Best of all, though, was the glint in Hugh’s eye as he remembered the antics of him and his friends as they tried to defy some of the pool rules without the lifeguards seeing. I think some of the officials were rather hoping the kids present were focusing more on the cake than Hugh’s words at that stage…

What a nice event, though!

Proof, if any were needed, that swimming pools are still the hub of the community.

And if any of the other outdoor pools in the area are thinking of a similar celebration: Corrimal, Dapto, Albion Park, Unanderra, Warilla, I know an excellent baker who would I’m sure love to produce another Olympic Pool cake…