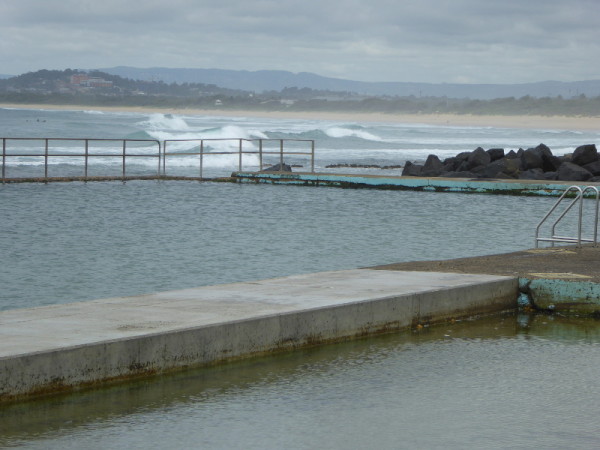 The name apparently comes from the Aboriginal word ‘kowradgi’,  meaning ‘guardian of the sacred stones’

It was a cloudy morning, not long after low tide, for my swim in Towradgi Pool. It’s funny how grey water is never quite as inviting as the blue stuff, and the slipway into the pool had a layer of green slime underfoot which made it look too slippery to risk.

So I opted for the stairs midway along the 50m length of this pool, and joined three or four others: young Aaron on holiday from Yorkshire, with his Nan, who’s lived round here for 44 years; and a couple of older guys quietly doing their laps.

There’s a slight slope to the pool, but not really much depth difference between the shallow end and the deep. The floor of the pool is pretty smooth, other than the occasional clump of seaweed.

Best thing about this pool are its views. It stands on a small promontory meaning you can pause at one end and look northwards up Corrimal Beach or take a breather at the other end for views back along Wollongong Beach, as it curls round to the lighthouse and harbour in the distance.

Oh, and that green slime on the ramp into the pool? Nothing to worry about; I walked out that way without a slip or a slide.

I reckoned this pool might be a completely different place at high tide when the waves must hit it broadsides. So one I returned on another grey day to have a look. There’s a pic in the gallery showing the waves gently coming over the sides, though this was a calm day so it’s probably very different in a strong wind or swell.

The pool is right at the end of Towradgi Road, which runs directly east from the Princes Highway (between Fairy Meadow and Corrimal). The actual end of the road is just for cars turning so you need to park in the Bowling Club car park. By train, it’s a short walk from Towradgi Station.

To get in you have the options of the slipway/ramp at the shallower end or vertical steps at the midway point.

There are two fresh water showers about 50m from the pool and changing rooms with more showers which are open dawn to dusk.

No major differences, on calm days at least! At high tide the waves do come over the side of the pool, though, so you won’t get the smooth swim of low tide.

There’s a viewing area, with two raised levels for spectators or for storing your things while you swim. Judging by the shape of them at one end, I’d guess these had another function once upon a time, but without access to archive photos or locals who’ve been around a while, I couldn’t be sure.

There’s also a shallow paddling pool on the cliff side of the main pool at Towradgi.

This is one of the younger pools down the NSW coast, built in the 1960s. It was built by volunteer labour, and there’s a rather nice plaque stating that it was built in memory of the school children from this area who served in the armed forces in two world wars.

The same plaque also says it was co-funded by the local council and the Coal Board, a reminder of the main industry of this part of the coast until relatively recently.

Another signpost reminds us of the Queen of Nations shipwreck off the headland here in 1881, so well before the pool was conceived of. This Aberdeen (Scotland) ship’s captain and mate had both had a little bit too much of the ship’s cargo of wine and spirits, and let the ship drift onto the rocks here. The wreck is still there to this day.

More recently the local newspaper reported in 2014 on the presence of a wobbegong shark in the pool. See the link below for the story on this one, but nobody got bitten, it seems…

My only companion on the morning of my swim was a seven year old on holiday from Yorkshire. So check out the link to the local newspaper below, for stories of older regulars to this pool.

The Illawarra Mercury featured Towradgi pool during its series on rock pools in 2014. This is where the story is of one of the regulars in the water here, plus the unusual visitor (the wobbegong shark).

The NSW Ocean Baths website blogger came here in 2009 as part of his never-completed tour of NSW pools.

The Bowling Club right next to the pool had bingo on the morning I was here so I didn’t want to disturb them…Instead I dropped by Anna’s Delicatessen, a few blocks back towards the Memorial Drive. Anna will do you a decent coffee and nice cheesecake, but make sure you ask her not to make it too hot or it might burn your tongue…

But if you love good coffee, it’s worth going the extra mile to: 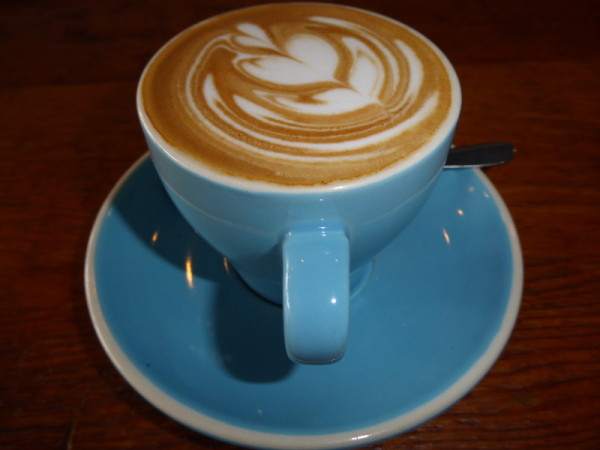 These guys serve up the excellent Single Origin Roasters coffee, and they know what they’re doing with it on the beautiful Marzocco machine. They also offer cold drip and various other ways of preparing the coffee, like aeropress and v60, but their basic flat white or cappuccino is worth the hike (or short drive) from the pool to experience.