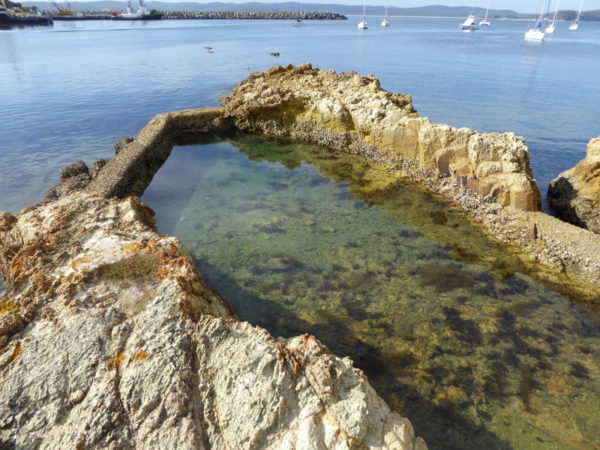 We’d never have found Thompson’s Point Baths in Eden on the NSW Sapphire Coast without the help of this site. Well, actually, local gent Rob Whiter found me via my ABC Radio interviews last year and got in touch to make sure I didn’t miss his hidden gem, which was the first rock pool in Eden – built very early in the 20th century – but fallen largely into disuse since the old wooden ramps that used to link it to the main cliff tops crumbled away with termite infestation a good few years ago.

Rob is lucky enough to live just at the top of the cliff overlooking Thompson’s Point Baths, and has many childhood memories of diving into the waters here at high tide and being carried by waves right to the edge of the pool and nearly out into the bay, which was far from Snug (its name now) in those days before they built the breakwater here.

Without those ramps helping access via the cliff tops, the only way into Thompson’s Baths now is by scrambling over the stony beach and oyster shell covered rocks to the pool walls and then finding a way into the water without cracking open your skin on a sharp shell. At high tide, Rob says, you’d have to swim across Snug Cove to reach the baths, and there is about a foot of clear water over the height of the pool walls.

I don’t think there are as many sharks in the waters around Eden as there used to be in the town’s whaling days, but I was quite pleased Rob suggested we try it at low tide. You need to be relatively agile and sure of foot to get to these baths. But what a joy when you finally get into the clear, cool water.

The baths haven’t been dredged for decades, so the depth is minimal at low tide, with only about half a dozen strokes possible before it becomes a case of avoiding dragging your limbs against those oyster shells. But Ivo Rowe pool in Coogee is smaller, and as long as it is possible to swim a few metres, it qualifies in my eyes.

On a warm February morning, with the sun shimmering on the water all around, and little fish darting about among the sea weed and rocks at the base of the baths, this was a pure joy.

Rob would love to see that wooden ramp rebuilt and would love his childhood rock pool to gain heritage status. Eden has a more modern rock pool on the main beach, but that was built in the  1970s, and while beautiful too, it just doesn’t have the history and stories that must be there for the wonderful little pool at Thompson’s Point.

Eden is a magical place without the rock pools, and both of us had happy memories of visiting as children, but neither of us had been aware of the ocean pools.

I guess Thompson’s Baths is officially a ‘disused’ ocean pool, but since access is still possible, it counts for the purposes of this site, and good luck to any local campaigners trying to have this delightful bathing spot recognised more fully as part of the Sapphire Coast heritage.

You can get to Eden on public transport. There is a bus from Sydney, though it takes a while to get all the way down to Eden. We arrived by car, and met Rob at Eden Wharf, before driving round the edge of Snug Cove to park up by the beach there. Walk across the stones and over the rocky outcrops covered in sharp oyster shells to the pool wall.

I was glad of my pool shoes, both for clambering over those rocks and for sliding down into the pool itself. There is no real access point anymore. We got out at the ‘shallow’ end, and climbed back round the pool edge to return to the rocks and back along that beach. I wouldn’t risk repeating Rob’s childhood antics of jumping off that cliff face, at least until the baths get dredged and the water has a reasonable depth again.

Nearest changing room and shower is back at Eden Wharf. Nice warm water shower there, though only one for each gender. Toilets in same block.

I have seen nothing published about the pool at Thompson’s Point. The local newspaper the Eden Magnet reported recently that Thompson’s Point Baths were built in 1905 and extended in about 1908. It reported that the baths remained popular through to the 1960s, though they didn’t mention when those wooden ramps down from the cliff tops fell apart.

My search of the wonderful Trove website from the National Library of Australia gave me one more story from 1916 in what must have been the precursor to today’s Eden Magnet, The Twofold Bay Magnet. “The Eden Baths are in very bad condition,” said the article, with a call for the Town Beautifying Committee to take action (when did they stop having such wonderfully named council committees?).

There seemed to be no follow-up article, so I can only assume that the baths were cleaned up, since they continued to be used for another 50 years or more.

The same journalist who complained of the state of the baths in 1916 also bemoaned the fact that Eden had not been chosen as a military camp site. He reckoned there was ‘no purer air or finer climate’, and any soldiers trained in Eden would be fit to ‘do their bit’ in Europe. No link to the baths here, but it gave a flavour of the times in a small country town like Eden…

Rob was our host for this visit to Thompson’s Point Baths or Snug Cove pool. He was brought up in the house that sits just at the top of the cliff above the pool itself, so he has countless childhood memories of antics in and around the pool, including daredevil jumps from the cliff (so not always using that wooden ramp, it seems), timing the jump to coincide with an incoming wave, which would then take him out as far as the pool wall and sometimes beyond into the bay itself.

It was great to feel Rob’s passion for his childhood playground, and he has recently moved back into that family home at the top of the cliff. He joined us for a dip and even gallantly went back into the water over those nasty oyster shells to retrieve Anita’s hat when it blew back into the water and was irretrievable by hand from the pool wall.

He’d love to see the pool reopened and access made easier. To do that, the pool really needs heritage status, so let’s see if we can’t start the ball rolling on that and give Rob and others in Eden a helping hand in showing public support for reopening a rock pool in NSW. Hey. they’re doing this kind of thing up and down the UK coast, so why not in Australia??

This Eden Magnet story from March 2015 is the only mention I have found in any blog or press article that refers specifically to this older rock pool in Eden.

When we suggested a post swim coffee to our new friend Rob, we were very pleased to have him propose a visit to the very coffee shop we had planned to try first. This place is good for coffee an tea (and they even do a Devonshire Cream Tea if you get here early enough in the afternoons…) 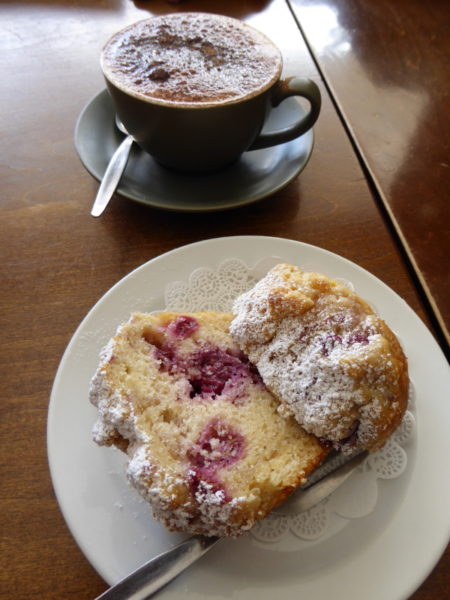 Cuppaz get their coffee all the way down from Byron Bay, and for us it was the best coffee in Eden. We also went back for breakfast there on the Sunday morning, when we tried their loose leaf tea, which gave us a really good kick-start to the day. We mistimed our return for afternoon tea as they close quite early at the weekends, but the scones and jam looked delicious. You can see why this is a popular place with locals – just a shame they don’t open a bit longer for summer visitors like us!