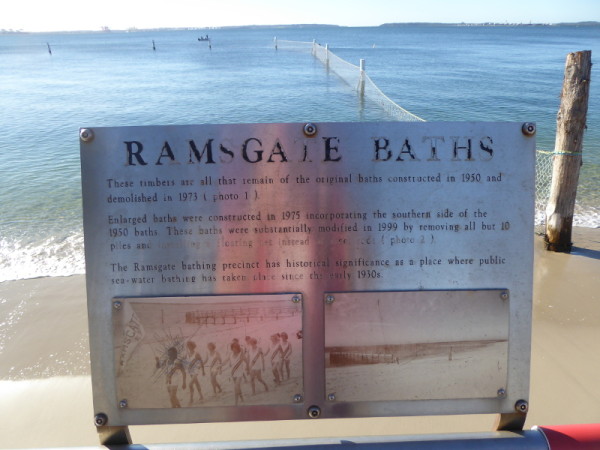 Named after the Ramsgate in Kent, also a seaside resort.

The air temperature may have been up at 22C and the morning sun still warming the back of my neck as I undressed on the sand at Ramsgate Baths, but the water has got a whole lot cooler in the last few weeks.

The guy who dipped in head first next to me and pushed off along the side of the shark net had a heavy duty swimming cap on, and this reminded me of the advice I received almost a year ago when I got out of the cold water at The Entrance: get yourself a swimming cap for winter swimming, even in Australia. With my hairless head, I’m quickly going to freeze if I carry on this ocean swim mallarkey for the next 3 months or so.

In fact I had barely done two laps of the 75m or so swimming enclosure at Ramsgate on Botany Bay when I decided that was enough for this time of year. My fingers and toes were not yet going blue but I could feel the chill in them, even after some pretty energetic freestyle.

These netted swimming enclosures can be a bit minimalist in terms of sights and sounds or other external points to keep an eye on. At Ramsgate, you are far enough south on Botany Bay so that even the planes landing and taking off at Sydney Airport feel fairly distant.

I was alarmed as any Pom would be at the warning signs that swimmers should do the shuffle before going over the sand to the water and swimming. This apparently is to disturb the stingrays that linger just under the top layer of sand at this time of year. I’m not really sure why you’d want to disturb those lethal beasts, especially remembering what happened to Steve Irwin a year or so ago…

Anyway, I took heart from the way the guy next to me plunged straight in. I did a vague rustling of sand with my feet in the shallows, not sure really what I’d do if I did disturb a stingray in the process. I’m guessing they just swim off, but who knows what else they might have in their repertoire.

I did quite like Ramsgate Baths, even if I didn’t stay long in the water and didn’t feel inclined to follow the other gent as he did full 360 degree laps along the shark net and then in the shallows just a metre or so from the edge of the water. A simple swim along the width or length or this baths from south to north and back was good enough for me.

The water was clear and there were a few small fish to keep me entertained, with the sun light low over the airport to the north to keep me warm every few breaths.

According to the guys on the benches back at the clubhouse, Ramsgate Baths are best avoided in the 48 hours or so after heavy rain. They have a new filter system that keeps the water clear most of the time, but even that new system overflows in a heavy storm, and the water smells like rotten rubbish, so who knows what pollutants might be in it.

Today, though, it was beautifully clear, and it hadn’t really rained for weeks before my swim.

I caught a bus direct from Hurstville train station that dropped me off on the main road through Ramsgate Beach. Lots of cycle paths and walkers round here, but I actually didn’t see if there was anywhere to park easily!

There are steps down from the bayside walkway to the beach at Ramsgate, or a ramp which goes down to the northern end of the swimming enclosure. At high tide, it looks from the damp sand I walked over as if the water comes right up to the wall of the promenade so you might be best advised to leave your things half way up the steps in case.

There are changing rooms with showers and toilets just above the baths at Ramsgate. The warm water showers were welcome after a cold swim, but the showers and toilet area were not the cleanest I’ve seen on my ocean pools tour, and judging by the empty cans and peculiar mess on the floor of the shower area the day I was here, not everyone who uses these facilities has just been for a swim…

Swimming in Ramsgate Baths is fine in any tide. It looks as if at high tide, though, the water comes right up to the wall of the promenade so don’t leave your clothes on the beach in a rising tide!

If you like memorial plaques giving bits of history of places like this, don’t miss the photos and brief text outlining the history of Ramsgate Baths. It’s by the steps at the southern end of the stretch of beach by the enclosure and shows how the baths have evolved since they were erected in 1950.

The council notice refers to public sea-bathing at Ramsgate since the 1930s. But this was not without controversy and tragedy.

I found some fascinating correspondence to the Sydney Morning Herald from early 1940. In January and February of that year a teenager was taken by a shark in the water up at Brighton-le-Sands and a man in his 50s died from shark bite wounds just weeks later. This led to an impassioned plea from a resident writing under the nom de plume of ‘Sharknet’ declaring that ‘what the people want is a wire net’ rather than the cord net that had been installed previously and had been eroded within two years.

He suggested that the wooden piles had been installed in the waters at public expense and the council now needed to act to ensure a ‘shark proof enclosure in Botany Bay’ In fact the same correspondent makes the gruesome prediction that the next body to fall victim to a shark would be down at Ramsgate, and he refers to the ‘shark-infested waters’ of Botany Bay.

The Ramsgate Baths we see today are a small remainder of the enclosure that was built in 1950, demolished in 1973 and then rebuilt in 1975. The floating net enclosure was installed in 1999.

One celebrity swimmer has Ramsgate connections: Cor Kint was a world champion backstroke swimmer in the Netherlands in the late 1930s, with his chance of Olympic fame being dashed by the outbreak of war. He emigrated to Australia in 1959 and by 1960 was teaching swimming at Ramsgate Baths. He was still well-enough known back in Holland to be the Australian host of the Dutch swimming team at the Sydney Olympics in 2000, but he passed away two years later. It’s a shame there is no memorial plaque in his name around Ramsgate Baths…

Max was an old Pom from Poole in Dorset, though it sounds as if he’s been here for a few years now. Max had just come out of the water himself and reassured me on the stingray situation. He knows all about the water quality round here and the best times to swim in the various swimming enclosures along Botany Bay. He’s a twice a week man, though he decamps to the heated pool in the depths of winter. He was also intrigued to hear that half my family comes from Southampton, proceeding to call me a ‘mush’. That helped to clarify something I had wondered about for the last 45 years as my Bournemouth cousins always called me Mush and I never knew it was a (playfully I hope) pejorative term for someone from Southampton. Ah, the things you learn talking to the locals around these tidal baths…

I rather liked this local newspaper article about the last remnant of the 1950 Ramsgate Baths enclosure being taken away in 2015.

This Sydney tourism blog post from 2010 shows the section that was taken away in 2015.

A first link for this swimming blogger Margaret Lynette – first time I’ve seen her in an online search.

And I’m adding this post from swimming blogger Sally from 2007 because it has a great history of the saltwater, but not in Botany Bay, Ramsgate Baths built in the 1920s, with some great comments from locals who swam there.

No more than 100m from the baths is the best coffee in Ramsgate. It’s not easy to spot this coffee shop, though, until you are almost falling over the chairs outside on the street. From across the road, it took a local guy a good two minutes to help me spot the coffee shop at all.

Overdose Coffee reviewed by the Fancy a Cuppa website 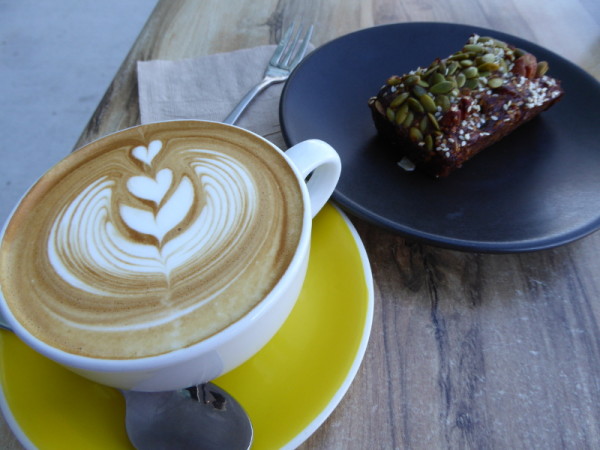 Really good quality here for your post swim coffee after a dip in Ramsgate Baths. They use a roaster I haven’t seen much called Reformatory Lab. Excellent coffee, but I was especially pleased to see so many options on the coffee menu, not just in how you want your coffee prepared but also in the roast and the single origins available. I couldn’t resist a single origin Yirgacheffe and was not disappointed. If tea is your tipple, they do the excellent loose leaf teas from Teacraft. And they seem to have the same supplier for their lovely fig and date energy bars as I saw at the rather upmarket coffee shops The Boathouse in Balmoral and Whale Beach.