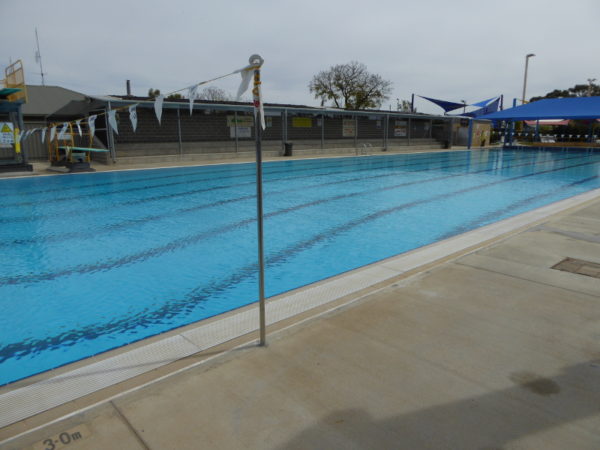 Parkes was named after the town’s founder, who came from Coventry, hence its twinning with that industrial city!

My swim at Parkes Aquatic Centre was a bit of a surprise. I had thought outdoor pools in country Australia were not generally open till November and many of them stay shut if the air temperature isn’t forecast to rise above 25C, or some such random heatwave number that this Pommy regards as ridiculous.

But there we were driving slowly past the Parkes Swimming Pool on our way to The Dish when we spotted a lifeguard strolling along the edge of the outdoor pool. But it was still September and the air temperature was not even 20C. We stopped to check and discovered that this was the pool’s opening day of the season, so we fitted a swim in as part of our weekend in the area.

The Dish was a fantastic experience and I’d write lots about it if this was just a travel blog, so we were already in good spirits before we even got back to the pool in Parkes. The swim at Parkes Aquatic Centre put me in an even better mood.

Now that I’m back in the ocean, my swims in aquatic centres will be less frequent, but there is such a feelgood factor to stretching out and doing laps for 50m at a time.

There isn’t much shade at Parkes Pool (though the first ten metres or so at the shallow end are all covered by a kind of tarp) so I was glad it was slightly overcast and the sun wasn’t that strong yet. And for backstroke, there aren’t really great views at either end, but the sun may well make you choose to swim backwards towards the shallow if it’s really glaring.

What I liked best about Parkes Swimming Pool were the diving boards. There are quite a few Olympic pools around NSW that have nice deep ends like the one at Parkes, which drops to 3m, but so few of them still have diving boards.

The boards were closed on this opening day of the season, but the lifeguard I spoke to says they are so popular with visitors that people come from as far away as Dubbo to use the diving boards on some days.

The pool has lane markings on the floor of the pool but on the day I was there, no lane dividers were in place. That’s fine doing freestyle, but with my wayward backstroke, it was a real challenge to stick to a straight line. Fortunately there were no other serious lap swingers with me in the pool, and the handful of kids splashing around the shallow end did a good job keeping out of my backward way.

Thanks for the bonus to my weekend, Parkes. Oh and don’t miss the logo of The Dish on the Parkes Swimming Pool sign board on the main highway. As someone with a bit of branding experience, I would say Parkes could do more to push the pool as an adjunct to the town’s iconic CSIRO connection. The pool frontage is probably 1960s, but the Aquatic Centre signage over the front entrance makes no reference to The Dish. Well, if I was in charge of marketing here, I’d have The Dish in every bit of Parkes pool’s publicity. Just a thought. Anyway, loved the place.

We drove to Parkes and I have no idea how you’d get here by public transport. It did look as though a train line goes through town, but I don’t suppose many people get off the train to go for a swim! The pool is right on the highway, though, which is how we came across it and saw it was open.

There is a hoist for disabled access. Otherwise, it’s just the usual step access to the 1.1m shallow end or jump in the wonderful 3m deep water at the other end. Diving only on certain days with certain supervisors present.

Changing rooms are open air (with some benches under cover in unlikely event it rains). Cold showers only, though there seemed to be a machine to put a coin in which might give you warm water. Try it and see.

Pool closed for winter and part of spring/autumn. Reopen its doors at the end of September.

I loved this brief piece in The Forbes Advocate from 11 January 1935 so much that I am going to reproduce it in full…Constructed at a cost of £7,000, the Parkes Swimming Pool will be opened by the Minister for Local Government on Wednesday next, January 16, at 2.30pm. The programme consists of exhibitions of swimming and diving by champions, and a grand carnival is scheduled for the night session. Our friends in the sister town are of the opinion that the provision of this facility will not only put a stop to the drift to Forbes for aquatic entertainment, but in no time will prove a very definite attraction to the would-be Charltons (Andrew Boy, presumably) and mermaids (this is pre- Dawn Fraser) of Forbes…

I also liked this piece on Parkes’s first ever Olympian, Rex Aubrey, who is still alive and 82 at the time of writing. Imagine the party when they saw him off to Helsinki to swim in the 1952. This local history article gives a flavour of excitement round town when Aubrey headed off – but bear in mind the dates: Parkes Pool was built in the year Rex Aubrey was born; and he swam already as a baby. So without Parkes Pool, another Olympian would probably never have made it.

1947 stats: 34,566 people went through the turnstiles in 2 months at end of 1946, and that doesn’t include season ticket holders. Numbers might be a bit down now I fear!

Things weren’t always good, though, judging by a press clipping I found from 1951. There were complaints of Larrikinism at Parkes Swimming Pool in the Dubbo Liberal & Macquarie Advocate: “The conduct of many youths and young girls left much to be desired,” said the Mayor, who called for the example of Dubbo to be followed, where a pool manager controlled larrikinism via a loud hailer…

All I found on Parkes Aquatic Centre was this piece by the construction company taken on to do the 2012 refurb of the pools.

The place I wanted to go to for my post swim coffee in Parkes was owned by a guy who was away in Melbourne to watch the Grand Finals – so, sorry Onnies Coffee, I missed out there. I liked the alternative, though. 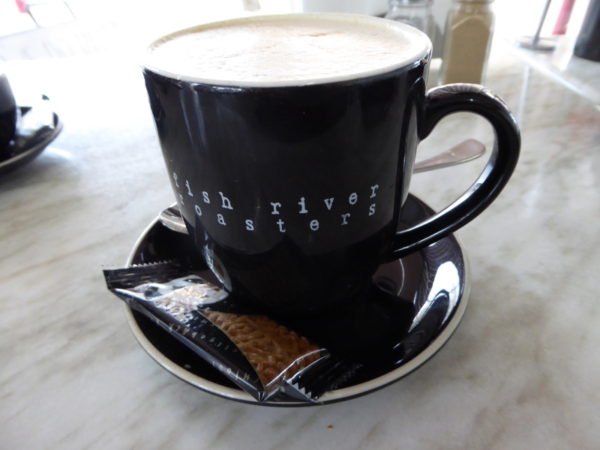 This great little place for coffee in Parkes uses coffee roasted in Bathurst by the Fish River Roasters. Big city coffee lovers who worry that they won’t get a decent brew in country NSW need not fear. They made a good, smooth flat white at Cafe’n’Ate, on Parkes’ main drag.