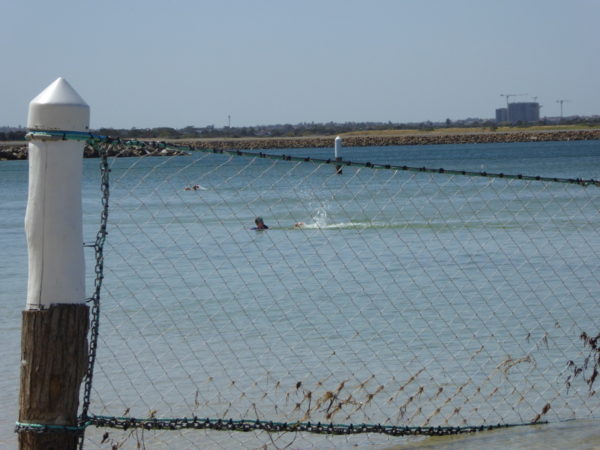 Kyeemagh Baths don’t get the best write-up of Sydney’s swimming enclosures and many I spoke to on Botany Bay say they never go near the place. Certainly, until the day I finally got in the water at Kyeemagh, I had never seen anyone even paddling in the water here.

The first problem is that unless you pick your tide – and high tide is the only real option at Kyeemagh – you have ankle deep water for quite a long way out. Add to that the warnings for much of the year of hidden stingrays lurking in the shallow sands ready to give you a nasty sting if you don’t do a decent stingray shuffle to frighten them off. And then there is reported pollution from the nearby Cooks River, which means I would definitely be avoiding the place after a period of rain.

But the big plus to Kyeemagh is its proximity to the runways at Sydney Airport. Again, pick the right day, and you can wave at passengers arriving and taking off at Sydney every few minutes (other days I have stood for half an hour and seen none – so the runways also depend on wind and weather, I believe).

And when I did finally get to the beach bang on high tide on a beautiful sunny day in September, with the school holidays in full swing, not only did I take the plunge with pleasure, but I was not the only one by a long way. There were two other gents doing a few strokes, and a whole host of kids splashing around in the shallows, and September seems to be stingray-free month as there were no ominous signs up about them either.

The water also was beautifully clear, after the weeks of dry we have had this winter and spring. It was still cool enough for me to want my swim cap on, and after I’d done a full length from one side of the shark netted area to the other, my fingers were not far off turning blue, so I didn’t linger in there. But Kyeemagh was a much more pleasant experience than I had expected.

I think it’s one of those pools where you just need to pick the right time of the right day and get the weather right, too. And I can’t think of any other airport in the world where you can swim outdoors this close to the runway.

There is one bus that drops you off near Kyeemagh Baths on the main airport road. I did catch it once and it was heading down to Sans Souci. There is ample parking on the road near the baths, but you need to approach either from the airport or do what I did and approach from Bestic Street. You cannot access this parking area if arriving from down Botany Bay and Brighton.

At high tide, it quickly gets deep enough to swim, but at low tide you need to paddle or wade quite a way out. Access only via by the beach.

There are toilet facilities with showers in the building above the baths at Kyeemagh. Take the path heading diagonally south (away from the airport) to find them. Perfectly functional showers, though I was attacked by half a dozen mosquitoes as soon as I got near the shower area, so beware of that menace….

Best at high tide. On other tides you may need to paddle or wade some way out before getting to a depth where you can swim.

Back in 1930 press clippings from the Trove website show the excitement among Australia’s polo community at the time over a new polo ground being built at Kyeemagh. I’m guessing polo was more of a mainstream sport then than it is now, but through the 1940s and into the 50s Kyeemagh was synonymous with polo.

By 1944 the issue of sand drifting and how to deal with it was vexing the local council. Not that this would have affected the polo community unduly, but a lengthy piece in The Propeller newspaper (linked to aviation and the nearby airport maybe?), showed how detailed discussions took place with engineers at Kyeemagh on how to deal with those shifting sands. I get the impression these days, the sands are allowed to drift more where they will, hence the silting of Dolls Point Baths and the permanently shallow water at Kyeemagh Baths. Happy to be corrected by any local who knows different though…

The Lazy Swimmer blogger wrote about Kyeemagh Baths in 2013.

Bestic Street is back over the main road from the baths, but worth the effort crossing the road, and only seconds from Kyeemagh Baths as the crow (or pelican) flies 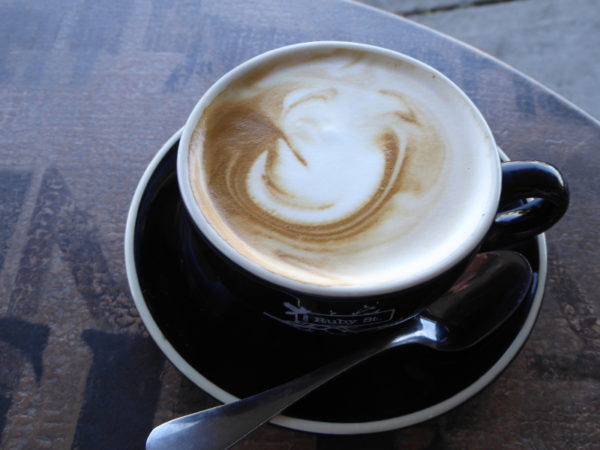 A really good flat white and excellent freshly-baked muffins. I cheated and had my coffee pre-swim for a change because I was waiting for that high tide, but again, time it right and this is perfect place for your post swim coffee in Kyeemagh.