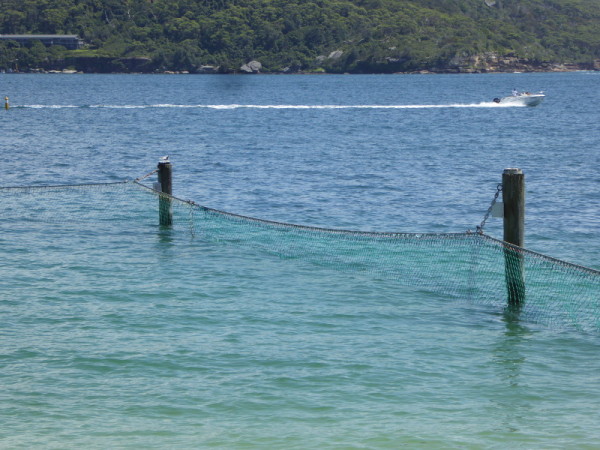 Named after a former Minister of Lands from 1911

This is the best beach in Sydney to go for a swim, at least according to the lady who got off the bus with me at Nielsen Park, which sits towards the ocean end of Sydney Harbour. It’s a great spot for swimming, with or without the shark net, she added.

That shark net protects about a 100m stretch of water off what is disconcertingly called Shark Beach (and the net is taken down for four months in winter).

There were already dozens of people in the water by the time I arrived on a hot Friday morning in February; quite a few seemed to be tourists so word has clearly got about re Nielsen Park and its fabulous swimming possibilities.

But only a handful were actually doing much serious swimming, and none of them really ploughing up and down in squad style. In fact there was as much crissing as crossing as some swam straight out from the sand to the edge of the shark net and others tried the whole length of the pool.

When you get used to swimming laps, whether in an aquatic centre or an ocean pool with defined ends to it, you have lots of opportunities to stop and rest whenever you like. Not at Nielsen Park Pool, though. Unlike Murray Rose Pool up the road, there are no pontoons to rest on or jump off, and the water stays deep until about 10m off the sand, so once you’re out there, you just need to keep going.

With my goggles starting to leak, I found myself needing to stop pretty regularly, and had to revert to the roll-over option, lying on my back while I tried to pour that annoying water out of the eye-piece.

This is a wonderful spot, though. The lady at the bus stop was right. You may get the odd wave coming in after a fast ferry speeds past, but this is no ocean pool, even if you are quite close to the open seas here at Nielsen Park.

The setting is fabulous, too, and not just because it’s on Sydney Harbour. We have Mr Nielsen to thank for the maintaining of this as foreshore. He laid out the park and beach steps in 1911, with the beautiful Pavilion going up in 1915, originally a tea room – how fantastic must that have been.

But the joys of swimming at Nielsen Park Pool don’t stop when you leave the water. Don’t miss the wonderful old changing pavilion too, built in 1932, with most of the fittings surely unchanged since the 1930s. I especially loved the old showers, which sprinkled fresh water over me from a height of about 10feet as they must have done to others for the last 80 or so years.

I caught the train to Edgecliff and then picked up a 325 bus to Watsons Bay, which dropped me off at the edge of Nielsen Park, a five minute walk to the beach. Don’t make my mistake of going out into the street to look for that 325 bus at Edgecliff, though. It leaves from a bus interchange on top of the train station.

A quick walk over the sand gets you into the water here, though you need to negotiate some steps first, so I’m not sure how disabled friendly it is? The water gets deep pretty quickly so within about two steps I could swim and within 10m I was out of my depth.

The shady spots are few and far between so you may be leaving your things in direct sunlight by the beach. Changing rooms (7am-6pm) are beautiful: 1930s pavilion with big open space, exposed to the elements with beautiful park trees hanging overhead. Lovely showers that sprinkle cold water over you from a height – they don’t make them like that anymore.

I think you can swim in Nielsen Park Pool in any tide. At high tide the beach will just be very small and you may have to step straight from the steps into the water rather than beginning with a walk over the beach and a brief paddle.

Pavilion changing rooms open only from 7am to 6pm, though there are more toilets with a shower at the northern end of the beach and these MAY open longer.

Don’t forget that shark net comes down from about mid-May to mid-September. In those months, in waters off a place called Shark Beach, I might hesitate before taking the plunge, though locals may know better and for all I know, sharks don’t hang around the harbour when the winter cools the water off.

1954 press reports suggest the Nielsen Park beach and swimming area became mixed up in a Russian spy scandal, with court reports from the time finding one witness alleging that a Soviet spy had jumped off a Manly Ferry and swum 7 miles to Nielsen Park, getting himself through the shark netting without ruffling his suit and tie…

A more parochial row from 1951 press clippings has a bunch of school students locally contracting tummy bugs, with discussions as to whether the illness came from school milk not being pasteurised or whether pollution in Nielsen Park swimming enclosure was to blame, as the headmistress at the time alleged.

Another press report from 1940 discusses the controversy over the 1d entrance charge to swim in the enclosure at Nielsen Park. I’m not sure when that was introduced, though it may have been after the installation of a costly new shark net in 1937. I also don’t know when the entrance fee stopped, but thankfully now there is no charge to swim here…

Back in the 1930s, it was common to report numbers of people on the beaches on particularly hot days. December 1937 press clippings suggest around 11,000 people were at Nielsen Park beach, possibly not all in the water, but a considerable number compared to ‘crowds’ today.

And perhaps my favourite articles on Nielsen Park pool go back to 1932 when the changing pavilion opened. Only, in those days it had the far more banal name of ‘dressing shed’. And there were reminders to swimmers that their costumes had to cover their bodies ‘from neck to knee’.

And a gent I chatted to in the changing pavilion remembers there was once a row of lockers running along the middle of the changing space. They must have gone rusty, surely, with no roof over them?

Right above the pool at Nielsen Park is the beautiful 1915 pavilion kiosk that was built originally as a tea room. It’s a bit of a foodie restaurant now, but you can pick up a coffee and cake next door in the takeaway section.

Open daily at 8am 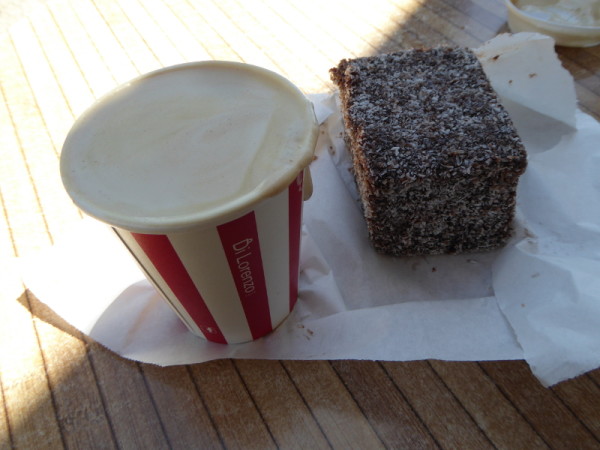 The coffee was a decent brew and the Lamington deliciously fresh. You can still sit on a chair at a table (outside only, though) and look out over the waters of the pool, but I couldn’t help feeling slightly like a second class citizen – you only get proper cup if you’re in the sit down section and there’s a full-on menu with waiter service there, so not my thing. They do serve the excellent loose leaf O2 teas in the restaurant, though, and you can’t get them in the takeaway bit…