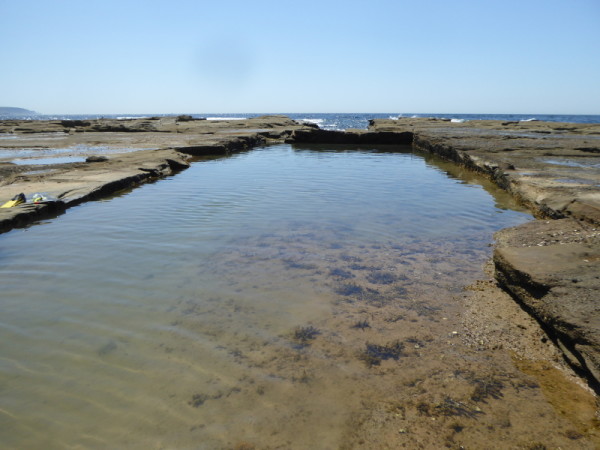 It took about 25 minutes to walk down the cliff from Otford to reach Bulgo Beach, but it was definitely worth it.

Bulgo is one of the few remaining shack communities inside the Royal National Park. Thankfully the locals were friendly and were happy to send us in the right direction to reach the little rock pool at the southern end of the beach, because without their help, I think we’d just have gone for a dip in the small clearing on the rock platform in front of you as you emerge from the cliff path.

There was a family of four already in the water when we reached the pool, and it’s so small that basically all we could do was lie on our backs in the water waiting for them to leave.

Originally this rock pool was blasted out for local kids to bathe in (and for storing fish caught, apparently). There is a wall at the ocean end of the pool, and at low tide that keeps the water level up to about my waist along a very narrow channel, just wide enough for me to do about a 20 stroke lap of freestyle once the pool was empty. Beyond this narrow channel, the pool gets very shallow, as I was to find, grazing my knee on the bottom as soon as I left that channel.

We were there about three hours after low tide, and in the humid heat of that February morning, it was great just to have a dip and try a couple of laps. I imagine at high tide the waves come right over that wall, and may even make the pool invisible if you didn’t know where it was, but come within a few hours of low tide, and it’s perfect.

The place was teeming with fish (not the locals’ catch anymore, mind), a few crabs, and probably a few other beasties I’d rather not know about. It was a really delightful spot, though, and we both felt really pleased to have made the climb down the cliff to get there.

Quite a few people were swimming in the narrow clearing on the rock platform immediately in front of you as you come out of the bush on the way down, so we decided to try that too. With an incoming tide, but gentle waves, this was the perfect moment for a dip here, too.

My bleeding knee put me off venturing too far (well, as I said on that ABC video a few weeks ago, I am wary of those sharks round here…), but this too was a fabulous swim, so if you come down to Bulgo and the conditions are right it’s worth giving it a go.

It’s possible to get here on public transport. Take the train to Otford and then it’s about 500m to the start of the cliff path down to Bulgo Beach. It’s fairly well sign-posted all the way down, though we did have to make a decision (opting for the wider path) at one point. The walk down the cliff through the bush took about 25 minutes (and about five minutes more to get back up). Or park at the top of the cliff if you’re coming by car – you’ll still have to walk down the cliff path…

As you emerge from the cliff path among the shacks, the rock pool is away to the right, beyond the southern end of the beach itself. You can see it from halfway down the cliff path, but you can’t actually see it when you reach the bottom. Hence our need for directions. It’s rocky and quite slippery so I was thankful of my trusty pool shoes for this one. The only way in to the water really is via the cliff side and you just paddle your way into a spot from which you can swim.

Nowhere to change here, so get your towel technique going. Nowhere either to leave your things or to have a shower afterwards. This is a real community pool, and is not there to cater for tourists as such!

Big differences. The wall on the ocean end of the pool at Bulgo was still well clear of the incoming waves three hours before high tide. But on some high tides it must surely be submerged.

No facilities down here. Nearest are in Otford, back up the cliff path.

The village of Otford, with its train station on the Illawarra line, was actually once called Bulgo. They changed the name when the train line was finished. And it was about that time that a group of coal miners from the nearby pits decided to set up a kind of tented camp down here at the beach that is now Bulgo.

By the 1920s, some of the miners had built themselves shacks like the ones that are still there today. And gradually, it is said, the other miners’ wives demanded homes just as good once they saw the proper shacks going up. Most of the shacks there today date from that period or shortly after, so they are fantastic heritage dwellings today.

The rock pool was blasted out of the rock platform in the 1930s, and used as a safe place for local children to swim and to store the fish caught off the coast here.

Press clippings from the 1920s suggest the local authorities were to offer bags of cement to the community to help them construct the pool, but these were returned when the work couldn’t go ahead. Even in the 1950s, it was said that one local resident – a Billy Pearson (thanks to John for that information passed down through the community) – had several bags of cement behind his shack, which he intended to use to build a retaining wall for the pool. But again, the work was not carried out. It was only in the 1980s that the ocean-end wall was installed – until that time, the pool was always empty at low tide.

And now nearly 100 years since the pool was first mooted, it seems that the locals are again being asked to donate bags of cement so that repairs to the wall can be made in 2016 winter to keep the pool serviceable.

As well as the friendly ladies out sunning themselves in front of their shack (the ones who gave us directions), we were delighted to meet John, who has had a shack down in Bulgo for decades, and has been involved with the local shack community groups set up protect the beach and the community here.

It’s John’s keen eye that told us we wouldn’t need to worry about bluebottles for a few hours as the nor’easter hadn’t hit the shore yet. But he also had time to make us a very welcome cuppa and talk a bit about the community in Bulgo. He even did some of my research for me, searching through the wonderful Trove website from the Australian Library to find press clippings about the place.

The only other person I have found who has written about Bulgo Pool is the guru of Australian Rock Pool writings, on the new website All Into Ocean Pools

There is nothing down at Bulgo Beach (unless you get lucky with a special invite from a local), but right opposite the start of the cliff path at the top of the cliff of course is…

Open: Weekends and public holidays only (also school holidays, but best to check) 8am – 4.30pm

So, if you’re here midweek outside holidays, you may have to go back down to Stanwell Park for 16 feet espresso

What a lovely bakery and coffee shop this is. Owned by a friendly Argentinian family (so a chance for me to practise my Spanish a bit and to find out they had some Argentinian specialities to eat) since May 2015. They have continued the bakery’s long-standing tradition of making great pies, and have added in some fabulous Argentinian dulce de leche cakes called Alfajor. I noticed the Chinese couple before us switched their choice once we’d gone for these! The coffee was a good brew and most welcome either before you embark on that cliff path down to Bulgo Beach or after you have finished the climb. Really lucky that this place is right opposite the track that leads down to Bulgo Beach.