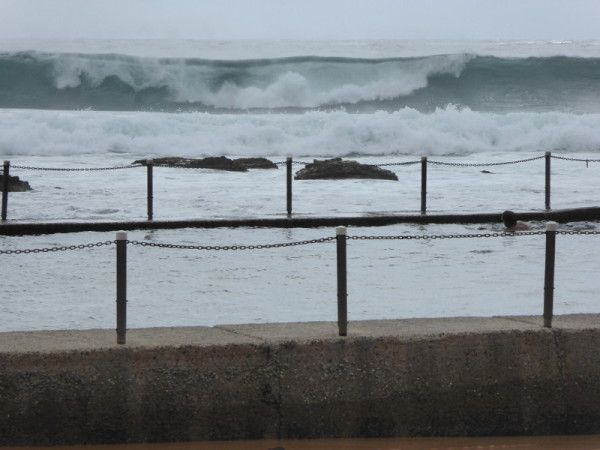 I couldn’t see any evidence of the times when this place got its name, as Sydney’s new port on the northern beaches.

The surf was strong enough to close Newport Beach on the February morning I turned up for my rock pool swim. The pool was perfect, though, with warm water – over 20C – and no sign of bluebottles or beached whales (a reference back to the dead hump back found in the rock pool after a big storm in 2012).

I love Newport Beach Rock Pool for its simplicity. It has none of the fancy frills of Bondi or Wylies; it sits at the southern end of Newport Beach, with surf pounding all around it, and it’s just a simple 50m rock pool.

Even the changing rooms near the pool have some simple charm to them: they’re open day and night (no locked doors), one simple shower (and one kind soul left a bar of soap on the ledge for others to use), and not even a bench outside to sit on. Someone used to handwrite notes on the pool temperature and whether the waves were coming over the edge, and these are pinned to the central door of the changing building. Sadly nobody has done that for a couple of years but the stats from 2014 remain and will hopefully inspire someone else to pick up the job again soon.

I was there towards low tide and some waves were still pouring over the pool edge, so on high tide I’m guessing you can get the washing machine effect in here, and the pool is surely surrounded by water at high tide, so I don’t actually know if you can get to it on a king tide (someone local might be able to tell me).

It is apparently 50m long, though I flew through my first laps in fewer strokes than normal so began to wonder if it wasn’t slightly under the 50m (but surely nobody builds pools just under Olympic size?), so probably instead should put it down to my improved stroke…

It’s a shallow pool (only just above my waist on the cliff side, and not a lot deeper even on the ocean side), with quite a layer of sand on the floor. One lady I spoke to said the sand can build up so much that you actually walk on the level into the pool rather than down the steps. I wonder how often they dredge the bottom to clear it; not in the weekly summer clean it seems.

The water was warm but the wind was whipping the water up so that it made a big difference swimming eastwards into the wind rather than with the surf and wind behind.

Jan, the lady I spoke to in mid-swim, pointed out some bird of prey nesting up in the cliff face above the pool, but I’m blind without my glasses so could barely make out the shapes of the cactus nearby, let alone the feathered beast next to it.

This is a great spot in big surf, though. The waves were breaking at least 100m out beyond the pool walls, giving Newport Rock Pool one of the most spectacular backdrops I’ve yet seen.

Regular buses from Wynyard drop you off on the main Barrenjoey Road just five minutes’ walk from the beach. Buses L88 to Avalon or L90 to Palm Beach are the routes to look for.

Stone steps down to the water are in the cliff side corner.

The changing rooms and toilets are 50m or so from the pool slightly raised on a concrete platform, so presumably above most tides.

If waves are coming into the pool at low tide, this must be a dramatic pool to swim in at high tide. And the wet sand all round the pool walls suggests you have to get your feet wet before you get into the pool if the tide is in.

Newport Rock Baths, as they were called then, were officially opened almost exactly 90 years  before my own visit. The Sydney Morning Herald of 1 February 1926 reported on the carnival to mark their opening to the public. The article speaks of the pool being 37 feet long, but I can’t help wondering if that was a typing mistake, since the races on the day were all 37 yards or 75 yards – does anyone know for sure?

The same article also says that the ocean pool at Newport was the seventh to be built in what was then Warringah Shire, following Harbord (now Freshwater), Dee Why, Collaroy, Mona Vale, Avalon and Palm Beach.

I haven’t managed to turn up any other stories or historical summary of the Newport Rock Pool, and the most recent big story seems to have been the washing up of a dead whale into the corner of the pool during a storm in 2012 – links to press articles on that incident in the links below. It’s amazing to imagine even a small whale fitting into the rock pool at Newport, but that story seems to be true!

Jan was brought up in Newport but now lives out in the Blue Mountains. She comes back for visits fairly regularly, though, and comes to Newport Rock Pool as often as she can. She keeps an eagle eye open for birds of prey above the pool, bluebottles and other nasties in the pool, and interesting sea shells around the pool.

When a baby whale washed into Newport rock pool a few years ago, the story made national news. This from The Australian newspaper.

The NSW Ocean Baths blogger interviewed a local who came originally from Germany when she was at Newport Rock Pool in 2009.

It’s only a short stroll back to Barrenjoey Road from the beach for top quality coffee. Near the bus stop, too! 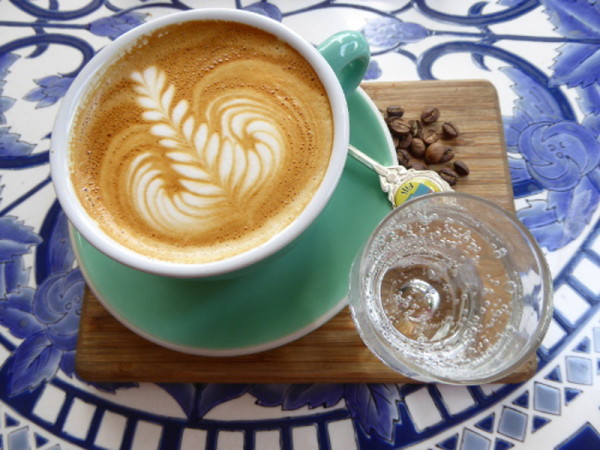 Fantastic quality coffee, roasted in-house (though not on-site) through their Background Coffee Roasters company. I tried both the Tanzanian single origin and their house blend. Both were delicious; the single origin usually best taken with black espresso drinks, but they let me have a taste in my flat white and it was beautifully sweet and smooth. Lovely banana breads and muffins baked in-house also. Lecio is the Brazilian owner and roaster who runs this place; Jessica was the barista on duty this morning – she’s a coffee lover who seems to have been to most coffee-growing countries and loves to talk about her coffee.