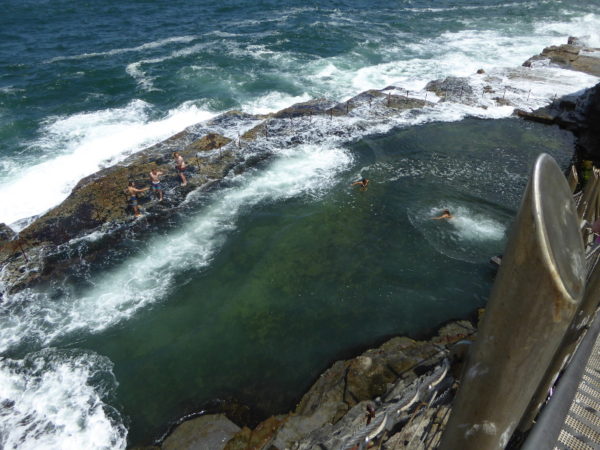 It took me five attempts to actually get into the water at Newcastle Bogey Hole. But wow, it was worth it in the end.

I really don’t know how those convicts built this bathing area almost 200 years ago, because there seem to be so few days when it is reasonably safe to get into the water here, let alone build the walls and fencing that keep the place ‘safe’ and made sure that the old convict colony commander could cool off when he needed.

I couldn’t help thinking of all that history as I finally lay on my back feeling the cool water around me and laughing out loud at the joy of this place.

I wonder what the commander would make of the bogey hole now, and hopefully the convict labourers would have had a cheeky grin knowing that 200 years later it would still be a playground, but not just for the affluent owners: apart from old me in the water, the pool had a string of youngsters in it, as young men braved the waves crashing over the surface or dived in from the side, and young women messed about in the bogey hole itself.

As we left, a bigger gaggle of youngsters turned up, with ghetto blaster in hand – noisy, but kind of nice that the place is still so well-frequented when possible.

There was nobody anywhere near the water the previous day when we turned up in a strong southerly gale. We stayed till about 4 hours after high tide, so nearer low tide, but the waves were still smashing dangerously over into the bogey hole and up against the cliff face.

It was a similar tale on three other occasions I had dropped by the bogey hole to take a look. And in 2015-16, the council even closed the Bogey Hole completely because some rocks had fallen in off the cliff face during some previous storm.

So my top tip for a good swim at Newcastle Bogey Hole: a fine calm day at low tide. Get it right, and you’ll even be able to leave your things by the pool side and not risk losing them out to sea in some big wave. I have seen photos of camera tripods standing on the ocean wall of the Bogey Hole, so I know on some days it can be that calm.

It certainly wasn’t calm even in the light breeze and two hours after high tide, but it felt safe to get in finally, with those waves washing fairly gently over the wall making the pool fizz rather than churn you out like a crazed washing machine.

I loved Newcastle Bogey Hole and am so glad I finally got my time in the water.

It’s a ten minute walk along the coastal path from Nobby’s Beach in Newcastle to get to King Edward Park from which paths wend their way down to the steep steps that take you to the Bogey Hole.

To get into the water, join the youngsters in doing acrobatic leaps off the side of the rock face, or take my more elderly option and clamber down the metal steps into the water.

There is now a toilet, in a kind of plastic portaloo thing perched on the cliff top above the Bogey Hole, I got changed in there, and they have great peep holes down the path back towards the stairs. No official changing rooms, though, and no shower nearby.

Newcastle Bogey Hole is said to be the oldest ocean pool in NSW. It was built around 1820 by convict labour for the local camp commander, a guy named Morriset. See the photo in the gallery with basic info on the history of the bogey hole.

The official NSW tourist website has a little more detail on the bogey hole history. In 1863, it transferred to local authority responsibility and was opened for public swimming. Back then, the pool was used mainly by men, with women only allowed access at certain times of the day – no mixed bathing in those days, of course.

The bogey hole was enlarged to its current size in 1884, and has over the years had various changing sheds, which presumably have fallen victim one by one to the storms and the seas here.

There’s more potted history in some of the links below…

Liesl got lucky judging by her photos taken on a hot calm day in January 2017 at the bogey hole.

Newcastle local council website points out that the bogey hole is now the responsibility of NSW state authorities.

There’s more history on the bogey hole on this ABC website.

There is more history, including the name changes for this pool, on this Hunter Histories blog.

This local newspaper article explains the work done in 2016 to make the bogey hole safe again – contains some great video footage too.

Go back into Newcastle CBD for great coffee… 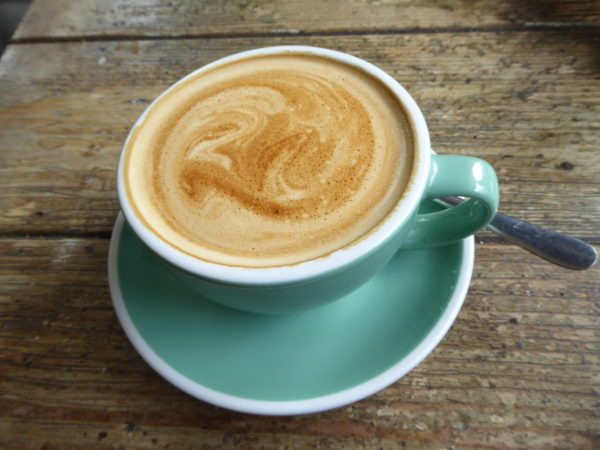 Ground Floor Café reviewed by the Fancy a Cuppa website.

Ground Floor Café serve up the fantastic Five Senses Coffee, so with the closure of my old fave local roasters just up the road, Ground Floor gets my vote for coffee in Newcastle.

And if you get really lucky, as we did on the Saturday, there was a guy playing old-time music hall songs on the café piano. Makes for a great vibe and a feel-good factor along with that post swim coffee.