Coomba Park Tidal Pool must be one of the most isolated swimming enclosures I’ve been to since I began this quest to swim the NSW ocean pools, harbour baths and other outdoor pools across the state. The peace on this part of Wallis Lake is extraordinary. Apart from the varying sounds of kookaburras laughing, whip birds catapulting and the occasional other exotic bird making itself known to locals, there was barely a sound at Coomba Park, once the group of five swimmers had left the enclosure to us on this bright Sunday morning in October.

We were pleased to see locals in the water, mind you. I’m always suspicious of swimming baths where nobody ever seems to set foot in the water, let alone venture towards the shark net.

But this bevy of locals were at Coomba Park for their annual dip (I’m surely really they go in more often, but this seems to be an annual ritual to get back into the water at the start of the season). The water temperature was fine, they said. The water was a bit murky, they all agreed, but only the gent who had swum closest to the shark net reported coming into contact with a big, blue jellyfish. Another swimmer said she had just missed the beast by swimming away as it appeared in front of her, but the guy said it had brushed down his arm, with no undue effects.

Still, harmless though the jellyfish might have been, I steered clear of that section of the baths, as I made my way up and down the enclosure’s 50m or so width.

With the water being so murky, I didn’t feel too inclined to do much freestyle, so stuck to back stroke and breaststroke, with much lolling on my back just taking in the atmosphere.

A big pelican grunted occasionally as it watched us from its vantage point on the high wooden post that marked the end of the jetty by the baths. Those kookaburras continued to cackle, and swallows swooped over the water. With no jellyfish in sight (or touch, thankfully), this felt like the most wonderful spot on earth for a gentle glide through the water on a quiet Sunday.

The isolation of Coomba Park is not complete. There is a house whose garden backs right onto the lawn by the pool (lucky them); there is a shower (though the council are currently replacing the changing sheds and toilets); and there is even a general store round the corner. But all the boats moored just beyond the shark net lay idle and, with the bush backing right onto the waterside all round this enormous lake, the swimming enclosure feels like it is right at the end of the civilised or built up world.

After our swim, we exchanged pleasantries with a bloke who was down for a day’s fishing. But that was it.

What a fantastic spot if you like a swim surrounded by nature and fancy a bit of bird-watching while you’re at it. We loved Coomba Park.

There was no sign of any public transport to get you to Coomba Park. It’s a 22km drive from the main road that takes you between Forster and Bulahdelah, and there aren’t many human dwellings along that road.

Enter the water via the sandy beach. The sand pretty quickly gets mushy, though, and within 10 metres of the water’s edge, I was sinking into my ankles in sand and weed. I was glad of my pool shoes and plunged in as soon as the water was deep enough.

There is a standing shower by the signposts for the baths at Coomba Park. I think there was a toilet facility once, and I believe the council are replacing them, but as of October 2017, there is no toilet and nowhere to change.

Hard to tell from our one visit to Coomba Park, but from the depth of the pool up by the shark net, I would say you could probably swim here on any tide.

I didn’t find any references to Coomba Park Tidal Pool in any other blogs or websites with stories to tell. Nor were there any press clippings I could find on the place in Trove website, so if anybody knows of any, do comment below with a link…

The general store in Coomba Park might do you a coffee, but we went in search of the Brunch Café in the local community hall, which is apparently open from 9.30am on a Sunday, though looked all quiet as we drove past at 9.40! In any case we are more post swim coffee fans than brunch eaters so we drove on in search of coffee.

In the end it was nearly half an hour’s drive away. 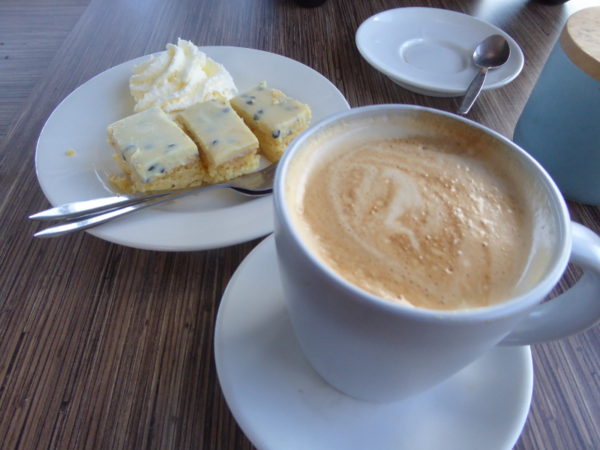 I’m actually not a fan of the particular coffee supplier they use at Frothy Coffee, but the flat white was decent enough, and the passion fruit cake squares delicious.

What makes this coffee shop worth the detour is the view and the setting. Take a table on the verandah and watch the fish – and jellyfish – move about in the water through cracks in the decking. Watch out for the kamikazi kookaburras, and judging by the beautiful gum trees lining the water you may even get the occasional koala sighting near Frothy Coffee. We could happily have sat here all day, and thought this would be a great spot to visit for a whole weekend some time. And just half an hour’s drive to that swim in Wallis Lake.