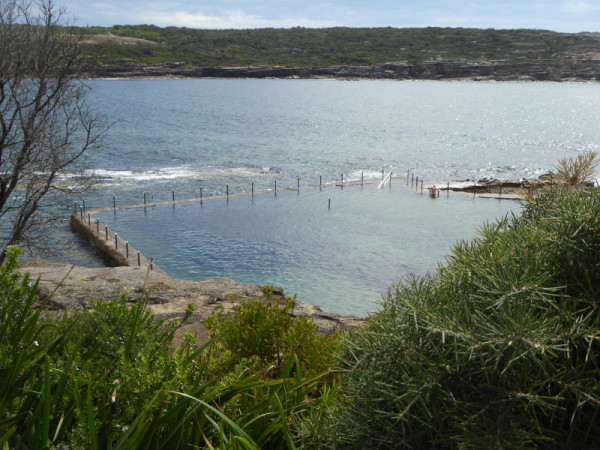 Named after a ship that ran aground in 1931

As you walk along the southern edge of Long Bay to get to Malabar Rock Pool you first pass signposts warning of snakes being seen in the area and then a ‘pool wildlife’ board with images of various marine life from tiddlers to stingrays via Port Jackson Sharks (don’t worry, these are not lethal and don’t get bigger than about 1.5m long, though thankfully there were none in the pool when I got in).

Actually, although the pool was teaming with fish, they were very small, and the only other marine life I came across was a wobbly bit of now-deceased jelly fish.

There was quite a lot of debris, though, along the wall on the cliff side of the pool: clumps of seaweed, sheets of paper and a few other bits of stuff I chose not to look at too closely. An elderly east European-sounding couple advised me to walk around the perimeter wall of the pool and enter via the wide steps with handrail on the ocean side. It was sound advice, although I had to choose my moment as the waves can come rushing in at that point and I didn’t fancy entering the water bum first.

None of the other locals who joined me in the pool after I’d started swimming had my qualms about the detritus by the cliff side of the pool, so I was probably fussing about nothing. Still, I kept to east-west laps, criss-crossing occasionally with one of the locals who was swimming north-south. I don’t think it’s a pool where people hold too strongly to lane etiquette; well, they’d struggle to anyway because the pool floor has no lanes and is very uneven, with areas where seaweed flows like long hair in the wind, and other bits where the rocks make it unsteady to stand.

In fact much of the pool is too deep to stand in anyway. A handy plaque by one set of steps tells us that the water reaches 1m90 in depth when the pool is full. It’s probably about 33m long and a bit less wide.

It was overcast as I swam, but the sun came out almost as soon as I was finished, and the sunshine was met with a chorus of kookaburras sitting in a tree not far from the pool edge.

There is a car park just above the pool. There are also regular buses stopping right by the pool. Number 299 goes from Circular Quay to Little Bay past Malabar.

There’s a very good ramp making wheelchair access pretty easy, though that also meant a warning sign for the ‘submerged rail’ down at the bottom of the ramp. There are vertical metal stairs at the western end, or the wide steps I took with handrail on the ocean side, though you’d need to be careful on these at high tide.

There is a shower by the poolside with three spouts. There are also lots of benches to store your clothes. But other than that there are no facilities for changing or toilets – nearest are 500m back in the park at the western end of Malabar Beach.

I was there about 90 minutes after high tide and some waves were still rushing over the pool wall on the ocean side. There must be a continuous flow at high tide and in a strong swell, it’s probable that the waves even wash over the area where the benches are. But this pool is good for swimming in any tide, high or low. I’d be a bit wary in a storm, though.

The original swimming hole here on the southern side of Long Bay was first formed as early as the 1890s, apparently.

The real rock pool with proper walls that came later was at first over 150m long and must have covered a good part of the southern side of Long Bay. But this pool suffered from poorly regulated sewage outlets even up to the early 1990s, when a new outfall was finally built.

There’s a plaque by the pool to mark Malabar Rock Pool’s re-opening in its present guise at about 33m long, and without the old sewage pollution problems. Premier Bob Carr oversaw the rebuild and the opening in 1997.

Some people have called for better facilities to be made available by the pool. But some are opposed because they don’t want to encourage greater use of the pool (!) and others argue that any such facilities would quickly be vandalised.

I didn’t get any names here, but one friendly guy accompanied me along the shore to help me find the right path down to the pool; this is his daily ritual, to walk to the pool and test the water (with his hands, not by going for a dip!). He reckoned it was 18C, but I’d say a degree or two warmer on the day I was here in December 2015.

A very friendly east European couple were full of advice on avoiding the debris at the cliff side of the pool. Someone perhaps needs to give him a lesson in towel technique; or nobody round here cares – I’m not sure, and at least he faced the cliff wall to undress…

The others I passed were less warm and welcoming, and I wondered if they were wary of my camera, of potential newcomers and of any publicity possibly leading to greater usage of the pool. There is a fine line, though, between having a nice quiet spot to yourself and the council refusing to pay for its upkeep. I think all these pools could survive well on double their usage, personally…

The most recent fellow blogger I could find was this one from 2013 by the I’d Swim That swimming blog – nice sunny pics on this one.

This article spoke of the dead whale that was beached here in 2011, causing the pool to be closed for while till the carcass was cleared.

Mrs G Spot’s swimming blog has been here a few times, though she didn’t date this particular visit to Malabar.

It’s a short walk back to Malabar Beach, where you’ll find 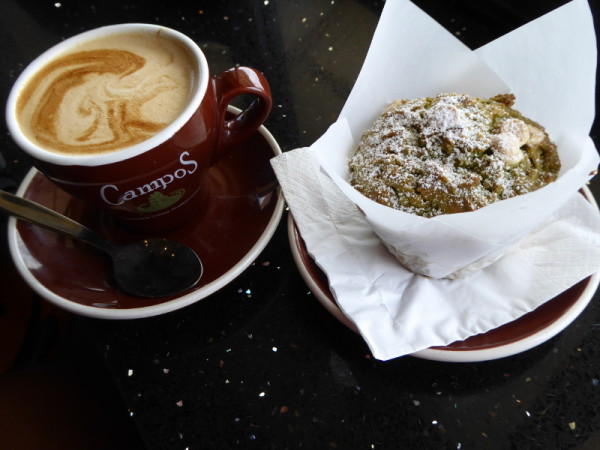 I like what they’ve done with this café at Malabar Beach: love the murals with the olde worlde Bushells Tea ad on the wall (apparently the whole mural was painted by a local artist, so this is no real old advert for Bushells). Love the views out to the water in Long Bay. And it certainly is the nearest place you’ll get for a post swim coffee at Malabar. Coffee is a decent brew from the reliable Campos Coffee roasters. And they had freshly-baked muffins with an intriguing green sponge, which turned out to be with a green tea base, so interesting!

But for me, it’s worth going the extra half mile back to Anzac Parade for…

Heritage Kitchen Garden reviewed by the Fancy a Cuppa website 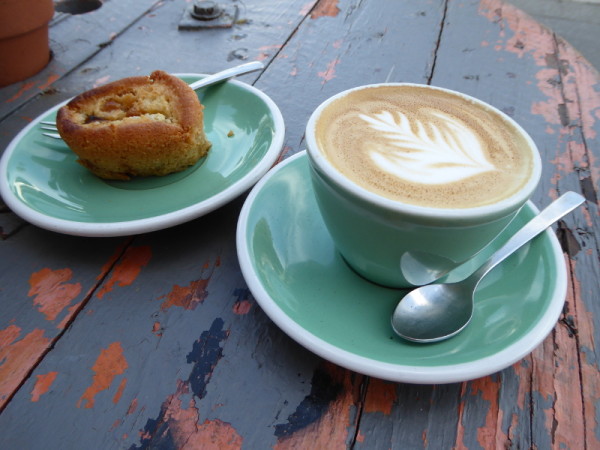 Best coffee in Malabar? Without a doubt. Best tea in Malabar, too. It’s not just that they serve up the fantastic coffees from White Horse in Sutherland, but they had an excellent Single Origin from Ethiopia on the go and although they keep that for people who take their coffee black, barista Dani was happy to do me a flat white using the Yirgacheffe and it was delicious. The teas they get from Tippity Teas, all loose leaf and top quality, too. Excellent home-baked cakes on offer (I had a kiwi and white choc friand), some coming out of the oven as I sat there. Loved the historical touches, too, with a photo of the old tram stop outside the café and tables made from recycled cable wheels. Great post swim coffee in Malabar.