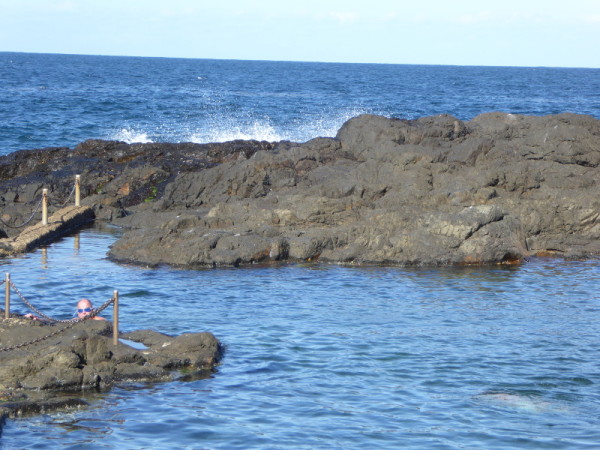 ‘Where the sea makes a noise’…

This is the pool I go to at the end of a long, hot day since it’s a short walk from my home in Kiama.

Although not the size of an Olympic pool, it never feels full, even with 60 tourists messing about on a summer holiday weekend. It’s not the kind of pool you’d do laps in, except on cloudy days when you get the chance to swim alone, but it is a fabulous spot to cool off and just feel the joy of being in the water in a magical place.

I tend to wear swimming shoes here because of its uneven, rocky floor, though nobody else seems to so I probably should just toughen my feet up!

When the tide is coming in there can be quite a splash over the rocks either from the east (over the higher rocks at the back of the pool) or from the south side straight over the rock pool wall. But those waves can also be dangerous and I have seen youngsters picked up and thrown down onto the sharp rocks on a stormy day. On the whole, though, this is one of the best pools for everyone – kids, adults, older regulars – just to have fun.

Fantastic views, also. Over to Bombo beach from one side, up to the lighthouse from the other, and down the coast to the south. You can’t actually see the blow hole do its thing from the pool, though.

There is 4 hour parking even at peak times not far from the pool on Blowhole Point. It’s a short walk down the path and then down a set of steps to get into the pool.

There are two sets of steps into the pool, one steep, one more gentle. Most kids just jump in from a ledge that stands a metre or so from the straight steps.

There are lots of natural level rocks where you can leave your things while you swim. The changing rooms, toilets and showers are 50m away up those steps and along the path. Very clean, modern facilities. And if they’re locked up for some reason, there’s a cold shower at the top of the same path.

At high tide, the waves come over the edge of the pool from the south (though that depends also on the swell); and in rough or big swell days, there can be spray over the top of the rocks into the pool.

Rocky, uneven floor of the pool and all natural, with no lane markings.

History and other stories about this pool

When it was first used as a swimming area in the 1880s, this was the men’s pool, while the ladies swam over the other side of the harbour in the area where Kiama’s more formal Olympic-size rock pool now sits.

The Kiama Ice Kubes keep the pool busy throughout the winter on Sunday mornings, and the nice thing about this weekly meet-up is that – unlike some similar clubs up the coast – anyone can come (it is not men only!).

The Illawarra Mercury covered both Kiama rock pools in one article of its 2014 series on the NSW ocean pools.

I rather like this YouTube video by Clear Skies TV of life under the water at Kiama Rock Pool.

Such is the pace of change in Kiama that none of my three coffee and tea recommendations near the blowhole are open anymore.

So in 2018, I recommend walking back to Collins St to the Hungry Monkey for coffee. See the pool review for the Pheasant Point rock pool to see my review of that coffee shop in Kiama.