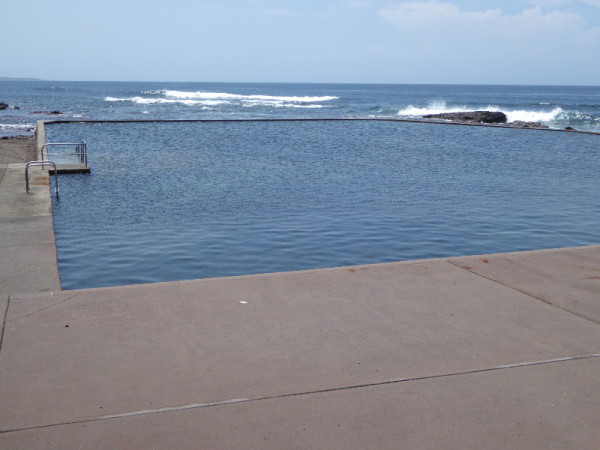 The former “ladies'” baths in Kiama

This must be one of the biggest ocean pools along the south coast of NSW. It’s about 40m long and wide enough for lots of lane swimming. But you hardly ever see anyone in it, which is really a shame, because the less it’s used, the less frequently it gets cleared out.

And this has been the problem for me in each of my dips in this pool. Because the tides only clear the ocean end of the pool thoroughly, the town end of this pool can get clogged up with debris. On one occasion it was just small balls of polysterene, which I swam past keeping my mouth firmly closed until I got to a clearer stretch of water; on another occasion it was more unpleasant looking gunge accumulating by the wall at the town end.

The good thing about this pool is that it is big enough to steer clear of the unpleasant bits, and on a bright summer’s day, it can be a delight to swim in, often all alone, knowing that the other rock pool at Blowhole Point is full of people.

At high tide on those warm summer’s days, it’s great to catch the waves gently bursting over the pool walls, though on the whole this pool stays well above the main ocean water (hence its tendency to gain  and then not release debris).

With the cliff face right by this pool and to the north, it gets lots of shade, so if you’re looking for a shady and safe swim in summer, this is a good bet, though once you’re beyond the summer months, it also means this pool feels a lot colder.

This pool is at the northern end of Black Beach in the centre of Kiama. You get to it down a long path from Black Beach itself and it’s tucked in against the cliff face before the headland.

There’s no real shallow end in this pool (it is shallower at the town end, but still a fair depth). But there are two ways in: one via vertical steps half way along the side of the pool; and the other a ramp that takes you well into the deeper section of the pool.

It’s a bit of a walk back from the pool to the changing rooms and showers (about 100m) along the path winding its way through grassland back towards town. No showers by the pool itself, so even if you’re towelling technique is good, you’ll need to rinse off probably back at those changing rooms.

At high tide, the waves come gently over the edge of the pool at the eastern side. But this pool is well elevated so the tidal differences are not especially marked

There are viewing steps raised above the pool height at the town end of the pool, harking back to the days when they held swimming carnivals here. It’s a good place to leave your things in sight while you swim.

This was once the ladies’ pool, though it became ‘Continental’ (ie both genders) subsequently and was used as the main pool for local competitions until they built the indoor leisure centre up the road…

Since I’ve rarely seen anyone else in the pool, I have never had the chance to chat to regulars here. In fact, I don’t even know whether there are any regular swimmers in this pool?

However, I have now spoken to some locals about this pool and have discovered that the original Kiama Olympic Pool now lies under the wide grassy area near this pool, and that this pool was once just the overflow area for the Olympic Pool which has now been covered over.

It is said that the building of the indoor leisure centre sounded the death knell for Kiama’s Olympic Pool, though some say it was the under usage of the new indoor pool that led local authorities to force swimmers inside by covering up the town’s only Olympic Pool – what a story, if it is true!

The Illawarra Mercury covered both Kiama rock pools in one article of its 2014 series on the NSW ocean pools.

Swimming blogger Sally came here in 2013, with some great photos and extracts on the history of the pool from the now defunct NSW Ocean Baths site.

There’s nothing by the pool itself, so take a five minute stroll to those heritage cottages on Collins Street for the best in Kiama…

The Hungry Monkey reviewed by Fancy a Cuppa website

The two local lads who opened this new coffee shop in April 2015 chose their coffee well, They use the excellent White Horse Coffee from Sutherland. And these guys really care about how the coffee is prepared and presented. It’s the only place in Kiama I’ve been asked ‘how’s the coffee?’ when I’m halfway through drinking it! There’s a selection of muffins and banana breads to go with it, though the main selling point of this café is its burgers: not something I go for usually after a swim, since we stick to the cake or biscuits.