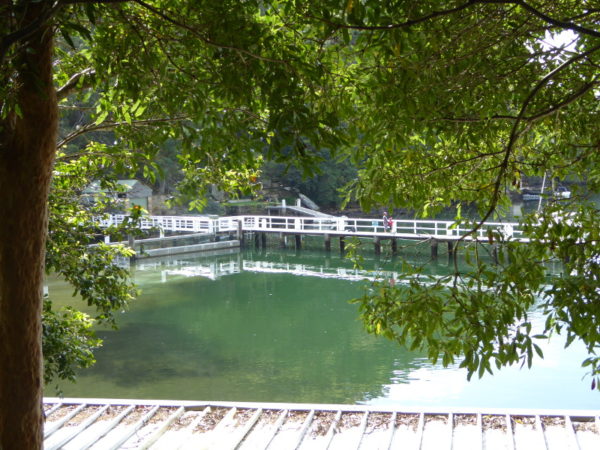 The gymea is a type of lily.

Gymea Bay Baths have one of the most beautiful backdrops of Sydney’s tidal baths, but boy you need to pick the right moment to come for a swim.

So, first the positives about Gymea Bay. The baths are tucked away in a quiet cove surrounded by gum trees so when you get out of the car (and even more so if you catch one of the buses here which drop you off a good hike from the pool) you fill your lungs with the lovely eucalyptus scents.

Then there are the birds. Blimey, this place is like an aviary, with kookaburras cackling, rainbow lorikeets screeching and various other exotic sounding creatures making the surrounds of these baths a magical place.

The baths at Gymea Bay look pretty appealing too, from a distance. There’s a 6-lane 50m section obviously used by the local swim club which meets Saturday mornings from October to March, but you can also get in via the sandy beach, with bush right up to the water’s edge.

There’s a wooden boardwalk around two sides of the baths, giving swimmers direct access to the baths via vertical metal ladders, but also crucially giving space for crowds of guys (and the occasional girl) with fishing rods.

According to the local gent I spoke to, over the Easter weekend that had just finished, the walkway was jammed with people fishing. And he has no problem with that… if they’d just take their junk away with them instead of leaving rubbish to blow into the baths and remains of bait piled along the boardwalk.

I’m sure Gymea Bay Baths are best at high tide, and I was there only a couple of hours off low. But in theory you can swim in the fifty metre section on all tides, if it weren’t for the film of grime and the plastic bags that dotted the surface, putting me right off going in.

Brian told me the baths at Gymea Bay used to be just about 30 metres coming straight out from the bayside wall, but when they were refurbished, the swim club put in a bid for a 5om section and the boardwalk was installed along with the dogleg in the shark net to provide a much bigger swimming and bathing section.

He has lived in Gymea Bay for 50 years now and swims regularly. When his kids asked for a swimming pool to be built in their garden, he told them there is a pool just a short skip away down in the bay. Good on yer, Brian. I’m just not too sure those kids used the baths as much as he did, sadly.

Still, I did get in the water on my second attempt. It was 8am on a fine sunny morning just an hour past high tide. There were still a few people fishing off the boardwalk and not too much debris this time in the water, but I still looked at the flow of grime on the surface that cut straight through the 50m section and opted for a splash around in the shallower waters nearer the sandy beach part.

The thing is at high tide there is no sandy beach and within a metre or so of the steps into the water you are at a depth where swimming is possible, and those fish are swarming round within three metres of the shore so it feels like an eventful pool to swim in – no wonder the walkway is popular with the fishing rod types.

It’s a fantastic secluded spot with tall gum trees all around and the best part of my swim in Gymea baths was lying on my back staring up at the screeching cockatoos as they dived from branch to branch making their territorial claims for the day, I guess.

The water temperature varied enormously, with some patches as warm as it feels in a bath at home (if you let the water lie for a while), but other bits giving me quite a chill. The other advantage of steering clear of the laned 50m section was that at 8am in late April, the sun hasn’t crept round to that part yet and it felt much more conducive to do a few strokes around the sunlit shallows.

There are shallow steps into the water (at high tide) or onto the beach (from about 3 hours off high), or take your pick from several sets of vertical metal steps into the deeper sections – two  are straight into the 50m lanes; two take you midway towards that bit.

There are toilets just above the baths at Gymea Bay, but no showers. And it’s a bit of a shame they couldn’t find space at least for a bench to put your things on while you change in those toilets. I’m guessing the swim club (meets Saturday mornings 9-11 October to March) have showers but that will be members only.

Swimming is possible on all tides at Gymea Bay, just as long as those fishing fanatics haven’t left a mess in the pool. But it is much better at or near high tide as that broadens your options on which part of the baths to use.

It was hard to find much in the way of history of Gymea Bay Baths.

I did find that The St George Call newspaper of 18 October 1929 (Thanks Trove website again) had Sutherland Shire Council seeking funds to build a jetty and swimming baths at Gymea Bay. So they weren’t around at that point.

I believe the original baths – with the 30m length from the shore were built in the 1950s and that there was a major refurbishment in 2013. Any more stories or information anyone?

There were no other swimmers here to chat with, and you get the impression fishermen are not the talkative types; at least not with the speedo and goggle wearing swim types! I did pop down here right at the start of our time in Australia and found a swimmer here. He was doing slow laps in that 50m section and said the water was wonderful, though he said to keep an eye on the stingray lurking nearer the bottom. I didn’t have my swimming gear that day so didn’t have a chance to test whether he was bluffing…

This website about Sutherlandshire has a page on Gymea Bay Baths and its refurbishment.

This 2012 blog about Sydney’s rock pools came to Gymea and wrote a nice piece.

The Lazy Swimmer blogger came to Gymea back in 2009.

And not surprisingly this fishing blog waxes lyrical about the good catches at Gymea Baths.

Gymea Bay is a very residential suburb and there is nowhere in the immediate vicinity of the baths for coffee. If anyone has a top tip for a post swim coffee, please comment below…