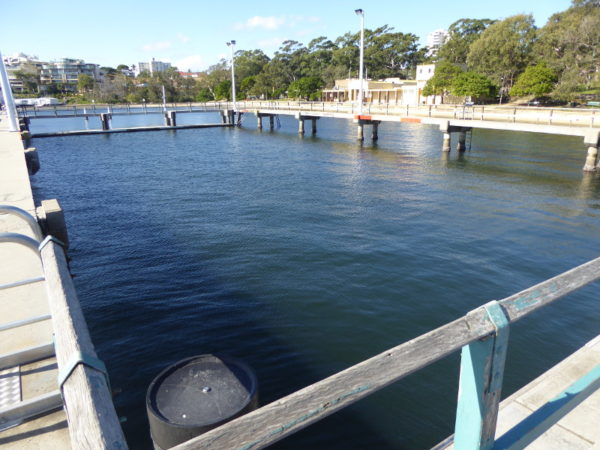 You can take your pick at Gunnamatta Baths between the 50m area and the more general shark-netted swimming enclosure along the sandy beach. Locals kept telling me the water can be a degree or two warmer at the northern end (ie away from the 50m pool bit), and there were a couple of guys in that section, but I opted for the proper swimming section, which was laned off with rope markers ahead of the local swim club holding their weekly relay race.

It was a beautiful autumn morning in bright sunshine when I pitched up at Gunnamatta Park to get in the water finally. I had dropped by once after a swim in Cronulla rock pool, and nobody was here then. I had also come to Gunnamatta on a very chilly morning a week or so ago and found a handful of hardy gents just getting out of the water, but even then with air temp about 15C and water apparently 16C, I didn’t fancy it and opted for a heated Aquatic Centre instead.

So with the swim club crowd gathering around me and reports of water temperature at a comfy 19C (these guys keep a close eye on the thermometer round here), this was a great chance to get back into salty water, and with the added luxury of those lane markers which are only there on club days.

The two guys in the water ahead of me took the deep plunge, jumping in direct off the raised boardwalk around the baths. I opted for the steep ladder down to the water, preferring the gradual entry even though those long ladders bring out the vertigo in me (I would never have hacked it as a sailor in those old days of sailing ships and ropes).

The water at Gunnamatta is pretty deep all the time, I think. I was there right on mid-tide and must have had 3 or 4 metres under me, and it was a little bit murky but not unpleasant.

Views here are wonderful while you swim. For backstroke it’s much better to swim northwards with the sun behind you and the views of the park to your left and the yachts beyond the shark net to your right. But even doing freestyle, I enjoyed those literally breath-taking moments when you come up for air and can look at the lovely gum trees in the park by the baths.

There were kayakers gliding past on Port Hacking River and cockatoos screeching overhead.

On a sunny Sunday morning, it was the perfect way to start a day in Gunnamatta.

It’s only about a 10 minute walk from Cronulla station to Gunnamatta Baths so lots of transport options. Each time I have been here, though, there has been ample parking right by the parkland that borders the Bay and baths.

Lots of options for getting in the water at Gunnamatta Baths: when the 50m area is too cold, the guys seem to plunge into the water via the beach and head for the ‘north’ end. If going into the 50m area, clamber down the vertical ladders as I did, or take the plunge from the boardwalk as the young guys did (but check the water depth before launching yourself).

Nice changing sheds, though I think the warm showers are just in the swim club part, so it’s cold shower only. And a good waterside shower outside just in case those sheds are not open for any reason (I used it anyway cos I’m like that…)

I’m pretty sure you can swim in Gunnamatta Baths on any tide, though some say they can get a bit muddy at low tide. Seemed deep enough to me, though.

And the guys who swam there on that day when it was only 15C outside, said it’s much warmer at the northern end away from the 50m section.

The baths were built in 1915, but the first press clipping I found on the Trove website dates from 1919 when the Council was advertising for men to fill the post of attendant at Gunnamatta Baths for the wage rate of £8 9/- a week!

Back at the first ever swimming carnival at Gunnamatta Bay Baths in March 1921, I loved the mention in press briefs for a Miss Bleibtrey, who ‘gave an exhibition of swimming’ – what on earth did the exhibition involve?

The Sun newspaper of 20 August 1938 had a clip that showed Cronulla Swimming Club members protesting at a report recommending the baths at Gunnamatta Bay be destroyed.  “If the baths are destroyed…the district will suffer as surf club members are drawn from the swimming club. It is necessary that members of the club be taught, coached and encouraged in competitions to be fit for surf work.” – Bravo those Gunnamatta protesters clearly succeeded since the baths are still there in 2017, nearly 80 years later.

It’s not all good news, though.  In November 1945 the ‘butchers’ picnic’ left the baths ‘in such a disgraceful condition that it was absolutely impossible to conduct a swimming race in the proper area’, meaning they had to swim and turn on the wire mesh of the shark nets. This explained, said the writer, the hostile attitude of club members towards the vandals who were visitors to the town. Thankfully, memories are not that long round here, unless someone still swimming can remember that 1945 swim??

Given my gate-crashing of the local swim club Sunday morning swims – actually an 800m handicap, I believe – I was pleased to have such a warm and friendly welcome from members who were happy for me to swim in their lanes before their race began.

I didn’t find much written about Gunnamatta Bay Baths among the usual swimming writers. The only entry I found came from the Lazy Swimmer blog and dates from a few years ago.

Just across the park and over the road is quite a good coffee shop so for you post swim coffee in Gunnamatta, go to…

Sit out the front and (I think) you can spot the waters of Gunnamatta Baths through the trees. Coffee is prepared on a beautiful Marzocco machine and it’s brought in from a roaster I hadn’t tried before: Where’s Marcel? is a Melbourne roaster that has started working now in Sydney too. I can take or leave Paleo stuff, but the paleo muffins here were delicious.