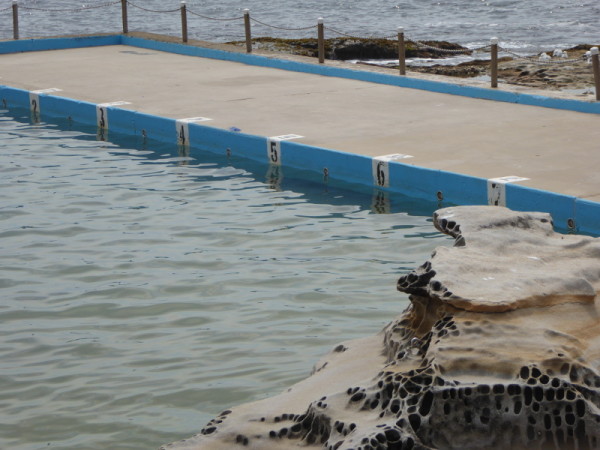 When swimming in public first became legal, this area was all owned by the Salvation Army…

My first ever experience of an Australian beach was at Dee Why, back in 1967 – I was promptly sent flying by an incoming wave as I paddled along the water’s edge, expecting things to be like the North Sea back home in Yorkshire. This was the nearest beach to our home for that year but I only have that first memory still engraved in my brain all these years on…

I probably came down to Dee Why Rock Pool on numerous occasions during our 12 months in Australia, but I couldn’t actually swim then, so this visit was my first real swim in the pool.

It’s a busy place, even on a Thursday morning in late spring. The small wading pool next to the main Olympic pool was packed with Mums and toddlers. I imagined it must be some special weekly get-together, but according to the locals I spoke to, there is always a crowd like that in the small pool (mainly, I was told, since they installed the shady area by the pool).

The 50m pool is good. It has lanes which helps wayward swimmers like me keep to the straight and narrow. According to Tommy (see below), when his older citizens group or the squads are swimming here, you need almost to book your lane. But this morning, there was just enough room for me to keep my own lane, though I rather liked the indiscipline of other swimmers forcing me to switch lanes a few times.

It’s a pool that attracts all sorts: lap swimmers, waders (it never gets really deep, with both ends seeing water barely over my waistline and apparently a slight dip in the middle of the length), and loungers, who were just taking in the sights, sounds and smells of Sydney’s North Shore.

The toddlers’ pool is a bright swimming pool blue, but the main 50m pool is (was in mid-November 2015) a rather dull, earthy colour. There were signs up warning of pool closure on November 25th for pool painting, so I’m intrigued now to find out what colour the pool will be after that.

You really get the sense of lots of locals coming down here for a regular dip – a real pool as part of the community.

I took the rather slow bus from Manly to Chatswood (No 136) because it stops right by the pool. Go to Pittwater Road (10 minutes’ walk away) for fast buses into Sydney CBD.

Easy access to the water in the main pool, down shallow steps, though no ramp for disabled access as far as I could see.

There’s one shower by the toddlers’ pool and further showers in the changing rooms and toilet area.

I’m not aware of any tidal differences. There was lots of seaweed washed up on Dee Why Beach the morning of my swim, but nothing in the rock pool, so I’m not sure too much comes over the pool wall even at high tide. It may well be different on a rough day or during a king tide.

Nice steps/seating area to store belongings while you’re in the water. Check Warringah Council website for cleaning schedule (one day a week during spring/summer).

When public bathing finally became legal in 1903, Manly and Freshwater immediately became popular with swimmers, but Dee Why was at that time owned by the Salvation Army, and they apparently kept people off the sand with lines of wired netting. The Salvos sold the beach in 1912, when the sands were finally opened to the public and locals immediately began to create a rock pool in the rock platform.

The original Dee Why ocean baths were officially opened in 1919. The Ladies Amateur Swimming Club was formed three years later – one of the oldest in Australia – and this must have been quite a joyous place to come on the weekend, with weekly races and a brass band playing (maybe even the Salvos band?).

They tried installing a diving board in the late 1920s, but this didn’t last long, being washed away in a storm (suggesting that storm waves do indeed come over the pool walls); you can still see the foundations of this board around the current 25m mark.

The wading pool was installed in 1973, so was not there when a young kid from Yorkshire had a first visit here in 1967.

More recent stories seem to revolve around alcohol bans and problems with drinking at the weekends and late evenings. I’d love to read some more recent tales that bring a more positive light to shine on this marvellous pool.

Tommy, a Lancashire lad who emigrated to Australia from Manchester in the early 1960s. He used to live out west, somewhere near Liverpool but moved to Dee Why on retirement and now keeps himself fit wading up and down the pool, or joining his fellow seniors in a regular lane swimming session.

There was the local surfer who fancied doing a few laps. Amazingly he said he’d seen two sharks in 20 years of surfing off Dee Why (and there was a sighting the very day after my swim, though not in the rock pool of course).

And there was the reticent Aussie who seemed to be worried the water might be too cold. Jeez, I hope he plunged in later – it must have been 20C in the pool!

And for a lovely photo of sunrise at the pools in March 2012, check out this blog.

You can’t get good coffee or tea any closer than…

The Beach Shed, On the promenade above the southern end of Dee Why Beach

The Beach Shed reviewed by the Fancy a Cuppa website 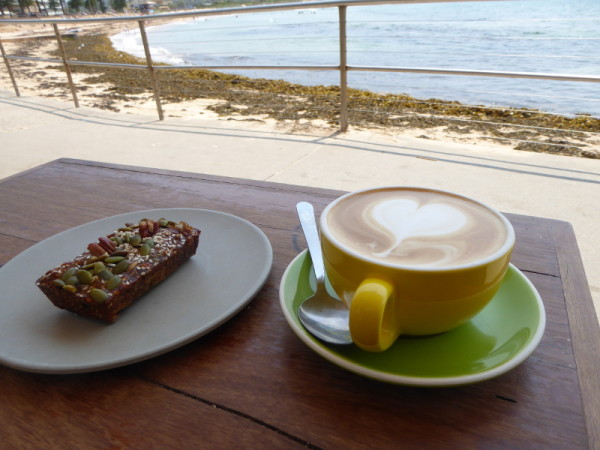 You don’t often get beach kiosks serving up coffee (or tea) this good. The Beach Shed is right on the footpath running just above the surf (they must surely get soaked during a storm surge?). It’s only a minute’s walk from Dee Why Rock Pool so a great spot for your post swim coffee. They do coffees from the rather good Daily Grind Roasters and I spotted a couple of teas (English Breakfast and Chai Masala) from the excellent Tippity Teas, so you’re catered for whichever drink suits your mood today. Some good banana breads and some healthy nut bar things to fill that gap left by too many laps. Good spot for coffee in Dee Why.