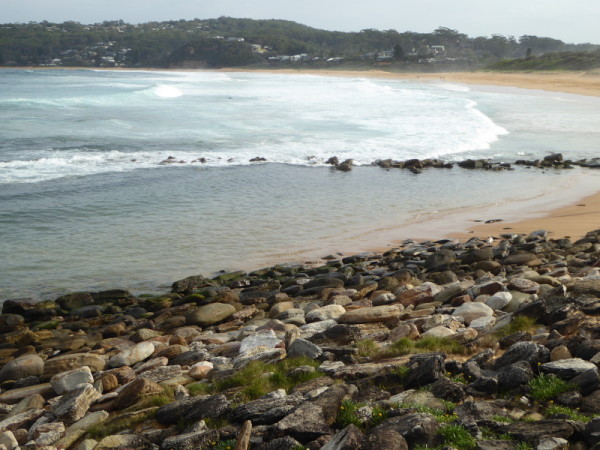 Named after the beach in Brazil…

The first time we pitched up at Copacabana Beach was on a grey Sunday morning after attending an outdoor concert in Singleton, further up the central coast in the Hunter Valley. Funnily enough one of the singers in that concert was from Copacabana and she had mentioned the place in her intro, so we were quite excited to find the place the next morning.

Sadly, neither the weather nor the tides were that kind to us. It was a leaden grey sky overhead and high tide at the beach, meaning we could only vaguely see the direction the lifeguard was pointing to have an idea where the Copacabana Rock Pool actually might be.

Basically, the ring of rocks is completely covered at high tide, and while that might be a good time to swim from the point of view of water depth inside the circle of stones, it wasn’t much good for first time visitors who didn’t really know where the edge of the pool was.

When we returned in June, the weather was marginally better and tide sufficiently out for us to see pretty clearly the outline of those rocks that form the pool at Copacabana.

So, I was determined to plunge in, even though there was a lot of sand being churned up from heavy swells out to sea and a lot of foam on the surface, making me suspicious of what other lurgies there might be in there.

Also the water was only about up to my thighs at its deepest when we turned up just after low tide.

Still, it was good to be back in the water and I did flop around mostly on my back, because freestyle wasn’t really worth trying, given the shallow patches dotted around.

It’s a rock pool that is constantly washed through by the ocean, though, and there’s a great spot on the beach just as you enter the water where the big waves look as if they will bear down on you once you’re in the water, but that ring of rocks has been cannily placed and although the waves make for a lively dip, I felt no danger bobbing around within the walls of the rock pool.

I notice that there is some Copacabana Master Plan which includes a design to ‘improve’ the rock pool, possibly creating a more formal wall and perimeter. No bad thing, in my view, though hats off to the two gents who did the hard slog to put these stones in place in the first place back in the 1950s.

It is seen by many as a good children’s pool, and with water depth like that, it probably is for much of the time. Still, on a hot summer’s day, it must be lovely at Copacabana Rock Pool – guess I’ll have to go back when blue skies are guaranteed to see it at its best.

Bus route 66 goes from Gosford to Avoca Beach via Copacabana, and services are fairly regular at peak hours. We actually went to Copacabana by car and parked up both times in the small car park opposite the beach. We had no problem getting a space but I can imagine in summer holiday periods it could be harder..

Since this is a ring-of-rocks style ‘pool’ off the beach at Copacabana, the only way in is via the sand. It’s a short paddle till you get to a point where you can take the plunge, but beware, the water doesn’t get very deep here, unless it’s high tide when the risk is not seeing the circle of rocks.

There are no changing rooms by the rock pool itself. There is a shower back behind the surf life saving club building about 100m away, but you can look back on the pool as you shower off afterwards. There are toilets and a changing room at the SLSC building.

Big tidal differences. Our first visit to Copacabana coincided with high tide and the ring of rocks was not even visible at all, so we decided not to go in the water because we had no idea what the outline of the pool looked like. At low tide, the ring of rocks are visible but the water is quite shallow (up to thighs at best). I guess high tide is best if you know where you are swimming.

I haven’t found much written anywhere about the ring of rocks at Copacabana beach. Actually the best history comes in the paragraph written on the All into Ocean Pools website where I learnt that two locals built the ring of rocks in the 1950s using crowbars and rock hammers.

The same website taught me that the pool is also known as Mavis Pool, and the reason for that is that coincidentally, the wives of both those local builders were called Mavis.

I did also read somewhere about a Master Plan for Copacabana, in which one part has funds earmarked to improve the pool, with maybe even the building of proper pool walls. I have no idea when this Master Plan was written or whether its time has been and gone. But if anybody local to Copacabana knows more and has an update, I’d love to get a comment at the foot of this post.

We just exchanged brief hello’s with the family who were also taking to the water the day we were there, but there was no reminiscing about times past in Copacabana Rock Pool, sadly.

The All Into Ocean Pools website has the most background information on Copacabana Rock Pool.

I rather liked this piece in the local newspaper about a local lady who was very active in the area into her 90s. There’s only a small mention of the rock pool but it is a nice reflection of local spontaneity and how the pool is part of the fabric of the community.

The options for coffee in Copacabana are not great. There is a rather soulless (we thought) café among the set of shops by the beach. We found the nicest cafe at the SLSC building, but I think that has now closed down so we need a suggestion for good coffee in Copacabana NSW.