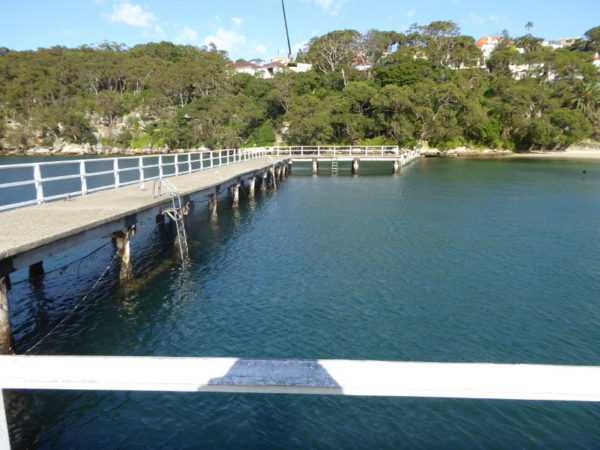 I was the only one swimming at Clifton Gardens Baths in Chowder Bay on a sunny but chilly May morning. Well, unless you count the heron that kept bobbing up and down in the water around the shark net, or the school of pretty big fish – about 50cm long I’d guess – darting about around me in the water. Oh, and the scuba divers in their thick suits just outside the baths themselves.

The air temperature might have been a brisk 13C or so but the water was warm, probably up around 19C and certainly warmer than it felt in the ocean pool down at Woonona were I had done a few laps over the weekend.

Clifton Gardens must have been an amazing sight when first built. Look at the history section below for more on the story, but towering above the current boardwalk would have been a big two story entertainment area catering for 3,000 people.

It’s a pretty big netted area, with what is probably a 50m section at the deep end furthest out into the harbour, but water also deep enough at high tide to stretch out and do a few strokes of freestyle off the beach and still be in fairly deep enough water.

Signs by the toilets suggest there may well be sea horses hanging about near the shark net, though I opted to steer clear of the net itself today after seeing the heron glide gracefully over a section that had sagged enough for a determined shark to swim over, and you know what I’m like when it comes to shark-averse swimming, especially when on my own in the water.

Chowder Bay is beautiful. The Manly Ferry steams past every half hour or so (and when the Clifton Gardens Baths first opened, they used to bring ferries direct to the wharf her for pleasure seekers) and the bay is near enough to the mouth of the harbour to get fresh ocean water in here on every tide, so a good deal cleaner than on some of my river enclosures I’ve been in recently.

On a bright, sunny morning, the water in Clifton Gardens Baths looks almost turquoise (though when I came on a reccie a few weeks ago on a cloudy morning, the water didn’t look so appetising that day). There’s quite a clutch of anglers along the boardwalk (and who can blame them with fish that big there for the taking, but that also means there can be some detritus on the surface near where they tip their rubbish sometimes).

The Gardens themselves are gorgeous, tucked into the hillside below Mosman, with lots of birds screeching in the trees nearby as you swim and then when you change afterwards.

It seems such a shame Clifton Gardens doesn’t have the presence it did 70 years ago, but then I guess we wouldn’t have so many exotic birds and there probably wouldn’t be the sea horses if they did.

There is a bus to the new residential complex just to the north of Clifton Gardens. That takes you to and from Wynyard. I have also driven down through Mosman to get here, though be aware there is only ticketed parking and it costs $5 an hour to park.

I entered the water via the sandy beach, but if it is low tide, or you want immediate access to the deeper water by the shark net, there are those long vertical metal ladders to clamber down.

Toilets are about 100m back over the grassy area near the kids playground. There are three showers against the far wall in between the ladies and gents toilets (I just say so because on my first visit to Clifton Gardens I didn’t even see them). And if you are heading north off the beach there is a wonderful old dinner-plate shower against the railing just near the kiosk, which is perfect if you want to order that post swim coffee while you shower.

Tide does make a difference but I think it’s possible to swim on any tide. At the highest tide, the little sandy beach almost disappears, and when I was there just an hour after high tide, I only needed to wade about two metres from the beach before it was deep enough to swim.

Thanks to the Lost Mosman website for the history of Clifton Gardens Baths. From that, I found that they were opened by Sydney Ferries in 1906 with a 3,000 seater grandstand, 12 foot wide boardwalk, changing facilities for 200 and diving boards. The two storey bathing pavilion was destroyed in 1956 by fire; a new shark netted enclosure was then built in 1958 and that is basically the same now as it was then. This must have looked very different, though, from 1906 to 1956.

I scoured the Trove website for news stories around Clifton Gardens Baths, and found quite a few.

The Sunday Times reported on the 8 December 1906 opening of the baths and swim carnival, where a thunderstorm reduced the crowd in attendance from the hoped-for 5000 to only 1,500.

Ahead of the opening, the Sydney Morning Herald said: “The swimming basin and beach will be provided with all the latest ideas and aquatic novelties for the amusement of young and old.” – I wonder what they were…

The Referee magazine (??) of December 1907 said: “I know of no more suitable expanse about Sydney for a swimming exhibition or carnival than the Clifton Gardens Baths”. Again, a shame it is no more.

In 1929 the Australian record for 440yds backstroke was set at Clifton Gardens Baths; Andrew Boy Charlton swam here in 1924 before heading off to the Paris Olympics.

I even found a 1931 ad for Bachelors! No, this was not a pre-War dating ad, but for accommodation aimed at unmarried men – 35/- a week got them bed & breakfast with free swimming and tennis. Ah, those were the days…

And I liked a little News in Brief I found  from 1949 when a film director called Roly Litchfield wanted to catch his comic star falling into Clifton Gardens pool – they did five takes of the fall (into the water) before they saw the sign saying: “The shark-proof net will be replaced next week”…

I swam alone at Clifton Gardens Baths, and those wet-suited divers turned out to be visiting Poms on holiday, so there wasn’t much local flavour to be gleaned from them.

Quite a few people have written about Clifton Gardens Baths.

Most recent blog post I found is from a guy who only recently began a similar quest to mine. This is the Outdoor Tutor’s thoughts from November 2016.

The Hello Sydney Kids site also liked Clifton Gardens, though their visit was back in 2012.

Don’t let this The Daily Telegraph story about the shark net being vandalised put you off swimming in Clifton Gardens. This was in 2013.

And the Lazy Swimmer blogged about his visit to Clifton Gardens in 2010.

If you’re lucky, you can get coffee in a little kiosk at the northern end of the beach at Chowder Bay. There you can sit decadently in deck chairs or take a table and look back across the bay to the baths you just swam in.

Open Daily 7am though the little kiosk on the beach is a little more varied, especially outside summer. It then becomes a bit weather dependent. 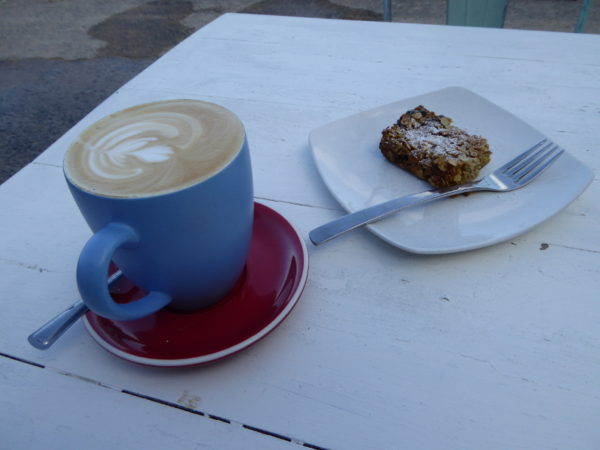 This is a little annex to the main Drift Cafe which is open more regularly and it’s just a few minutes’ walk further round the corner to the north – and by that bus stop back to Wynyard. You still get Manly Ferry views there but you can no longer see the baths.

They serve a  good Toby’s Estate coffee here and some nice nibbles to go with your post swim coffee. The shade from the morning sun would be welcome in summer but it was a tad chilly on this end of autumn morning. Nice spot, though and very relaxing to watch people wander by, birds flying over, those scuba divers bobbing up and down and just to look back at the waters of the lovely baths at Clifton Gardens.