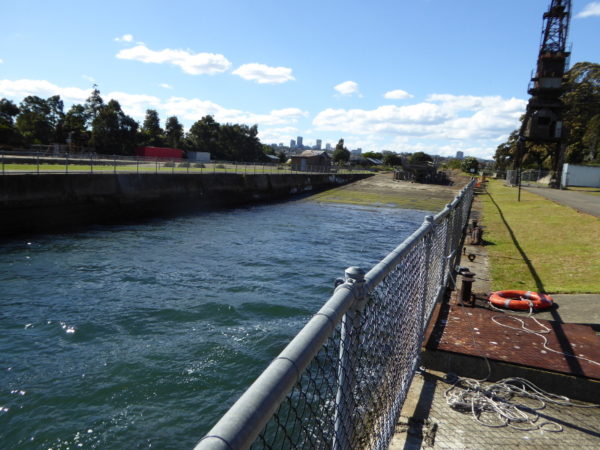 I was really unimpressed by Cockatoo Island. For a start the Causeway Baths, which are still on the tourist maps they hand out in the Visitor Info Centre have been deleted from the big wall map that stands on the outside of the same Centre, and when you get to the area where the shark net still hangs, presumably still protecting anyone who wants to get into the water here, there is a big, permanent-looking sign saying No Swimming.

I would also rename the place Seagull Island, because there wasn’t a cockatoo to be seen, but seagulls have taken over, with nesting birds hanging out by the old pool area, squawking to be heard on every corner of the island, and a line of about 50 gulls blocking the way into the water for anyone who fancies a dip anyway.

Normally I wouldn’t let a few seagulls put me off my quest, so I am posting a review of Cockatoo Island Causeway Baths anyway, even though I didn’t end up in the water here. But the tide was out, it was a long walk down the guano-covered walkway to reach the water, there was that No Swimming sign up, and the seagulls were starting to swoop as I approached and spotted nesting birds right by my feet.

When I came to do a reccie at Cockatoo Island a few weeks ago, the friendly folk in the Visitors Centre didn’t tell me the pool was closed, but did have a poor view of the water quality here, with talk of the bird droppings, not to mention various unspeakable sightings in the water when a storm has brought stuff downstream from the West…

This time, more friendly volunteers chatted about shark sightings in the harbour, but appeared not to know about the status of the Causeway Baths and weren’t even clear on whose decision it might have been to close the swimming area here.

The presence of so many seagulls suggests there aren’t too many people defying the No Swimming instructions here – but if you have, I’d love to get your anonymous thoughts on the experience, since I didn’t make it into the pool.

Ferry from Circular Quay, then a five minute walk past all the tents to the two slipways. The right hand one is for kayaks and has no shark net. The left hand one is netted.

To get into the water, you’d need to walk past the No Swimming sign and run the gauntlet of gulls at the water’s edge. Looked very slippery on the concrete too so beware of that if attempting a dip here.

There are showers and toilets not too far from the baths, though officially these are attached to the campsite.

Tide does make a difference to depth though the slop of the causeway suggests the water gets deep enough on any tide. It’s just more of a walk through the gulls at low tide. Maybe this place is better in mid-summer when baby seagulls have all fled the nest and maybe the gulls are a bit more laid back about life?

Cockatoo Island is full of interesting tales from convict days, later schooling days and wartime. The baths themselves seem to have been a 21st century addition, though it looks as if the powers-that-be have had second thoughts on their usage.

I only found one other swim enthusiast who has actually been to Cockatoo Island Baths and had a swim. The Lazy Swimmer said in 2016 that the baths were not there in 2009 and saw the ‘new’ shark net as a positive addition to the island. Shame it seems to have been short-lived. Or has someone else been here and swum?

What’s your story? Any memories of swimming here? Any stories to tell?

Since there was no swim, I had no post swim coffee on Cockatoo Island. But even if I had had a swim, I’d have hesitated to give my hard-earned money to the place right by the ferry wharf at the island.

The menu gives the impression they’d rather sell a burger and bottle of champagne to you than a coffee and cake, so a snack here would be a full-on lunch Sydney-style rather than a quick sarnie and a cuppa. They couldn’t even manage a milkshake so beachside kiosk this is not…

The cafe on the far side of the island is sadly only open at weekends. They at least will do you a toastie and coffee and be friendly with it. So if you are on Cockatoo Island, and you do go for that dip and need post swim coffee, make it a weekend and pass through the wartime tunnel to the cafe on the other side. That’s my tip anyway.