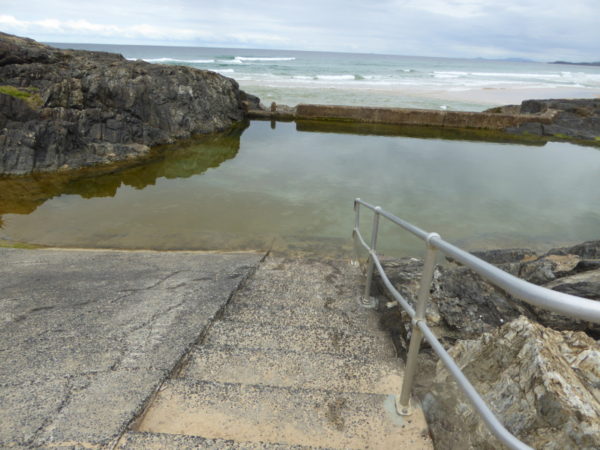 Mr Sawtell was a local landlord in the early 1900s.

Sawtell Memorial Rock Pool sits at the northern end of a beautiful sandy beach, which we reached at low tide. The pool lay empty when we turned up early on a Friday afternoon in November, and from the cliff top where we parked it looked at first a bit shallow to swim in.

But once we got down to pool level, we could see the deep end was actually probably about 2m depth, and when we got in the water down at the shallow end, it was possible to swim even in the 1m or so of water by the steps.

We were quickly joined by two other gents, one of whom stopped for a chat and said he was a regular in Sawtell pool. The water was really warm, with patches of brown algae on the surface at the deep end, and the local man told us it had been a few days since the tide had been high enough – or the swell big enough – to wash out the rock pool, so it was less clear and cool than it often can be.

It’s certainly a beautiful spot, tucked away at the end of the promontory, with those glorious sands stretching out beyond the pool. Judging by how high the damp sand was, I’m guessing a visit to Sawtell Rock Pool at high tide might create a rather different impression as the beach is probably a lot smaller then, and I’m sure on certain tides the waves come crashing over the pool walls.

The pool is a good length. Judging by my stroke count, I’d guess about 40m, and about 10m wide, so four or five swimmers could do laps side by side. And according to our local gent, there are several early morning swimmers who come down to the rock pool most mornings.

We didn’t catch sight of the ‘big fish’ we were told about in the pool. But we did swim through little patches where tiddlers clearly congregate, there were enormous sea slugs on the floor of the pool, and some entertaining crabs darting about along the walls of the pool.

Beware pushing off from the wall at the deep end as it is encrusted with shells, which might just give you a nasty cut if you pick the wrong spot.

But Sawtell made a great start to what was to be a lovely weekend of swimming in the north of NSW.

There were no road signs to the ocean pool or rock pool, and when I first stopped a local, she turned to point towards the Sawtell Aquatic Centre before realising I meant the ocean baths. Basically take the road out of Sawtell village as far as you can go along the promontory and park up by the lookout before walking down the slope to the pool.

There are vertical (and a bit slippery) metal steps into the deep end, or the stone stairs (also pretty green and slippery) down at the shallow end.

The big showers tower over you just beside the pool, but don’t get your hopes up for a warm water shower. The red button merely opens the tap for the overhead shower – cold – whereas the blue button delivers a cold wash for your feet.

There are toilets at the top of the cliff but no showers there and nowhere to place your clothes if you get changed there.

Sawtell Rock Pool can be visited on any tide. The waves had not come over the walls to flush the place out for quite a few tides, we were told, which implies that sometimes the waves do come over the edge into the pool.

It proved hard to find any history or stories about Sawtell Pool.

I took this extract direct from the Sawtell tourism website. “The pool was first unofficially used for the first time in the summer of 1962, however it was in 1963 that the pool was officially dedicated as a war memorial pool. In 2000 the pool was finally listed on the Coffs Harbour Local Environmental Plan (LEP) as a heritage item.”

We got chatting with a Californian chap who turned up just as we were looking over the pool. In fact he got in the water faster than us, so I only managed a quick chat when he paused in his laps. He thinks Sawtell is a wonderful spot – well, I guess he needs to if he moved there from California – and comes to the rock pool regularly. Once again, I am envious of these locals living so close to these magical places.

Not many people have written about Sawtell Rock Pool – or if they have, I couldn’t find their articles.

I was very envious of the person who writes Itching for Hitching blog, though, with blue skies and waves tipping over the edge. The place looks far more attractive than it did for our visit.

You’ll need to be at Sawtell Rock Pool before 11am to get the coffee that appeared on my google maps search.  But this is a mobile coffee van, rather than a coffee shop as such, so there was nothing to be seen at 3pm for our visit.

For coffee in Sawtell itself, I’d highly recommend… 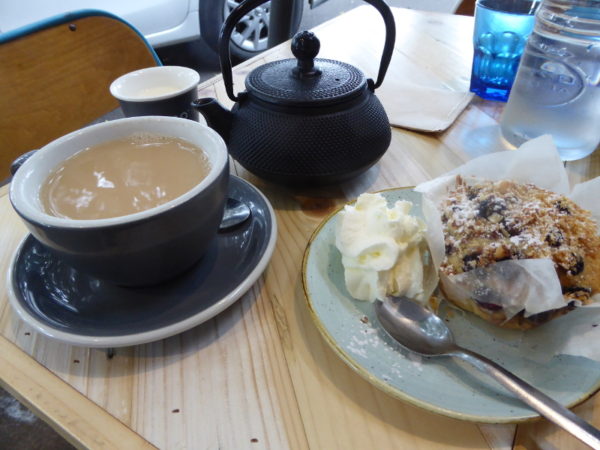 Love the name – a pun based on the fabulous Moreton Bay Figs across the road and the trio of people who opened the place. Love the coffee – from Will & Co; and the tea was excellent – from Mayde Teas. The home-made muffins were pretty delicious, too. And this place becomes a restaurant on the evening, so no worries about it closing early if you want a post swim cuppa.