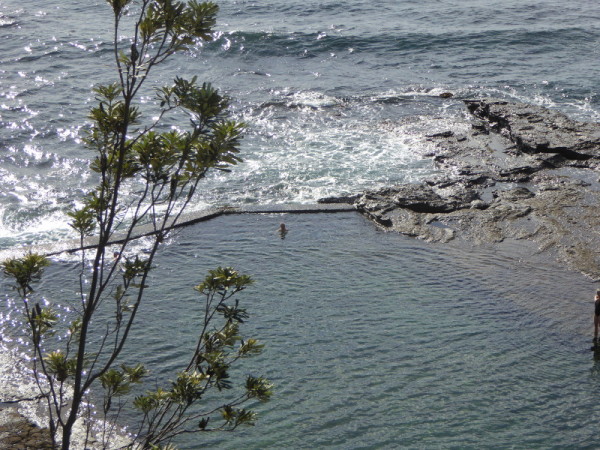 Its name dates from a bygone era for gender segregation in swimming. Open to everyone now.

Both times I’ve swum in this pool have been joyous occasions. Once, in the middle of a summer heatwave, it was a wonderful cooling off spot, even though the water levels were low as it was heading for low tide.

And tide times are important so pick your slot carefully for optimum pool conditions. My second swim here was on a balmy autumn day but it was early morning before the sun got too hot, and more importantly it was about 2 hours after high tide.

This is the best time to come to this pool. The waves are still flowing over the wall but it’s a gentle, occasional disturbance (or fun if you actually like swimming in waves) rather than the constant buffering you’ll get at high tide.

And the depth is fine for swimming right up to the wall at the shallow end (if you come about 2-3 hours after high tide).

These are the sort of days it feels good to be alive and plunging into the water brings an enormous grin to my face.

It was not busy (unlike the Continental Baths, just down the coast) but I was also never alone in this pool. I kind of like the reassurance of at least one more soul in the water with me – after all, who knows what the next wave might bring in with it…

There are no changing rooms here and it’s a bit of a stony walk from the steps where you can leave your things to the pool steps so I wore my rock pool shoes and was fairly glad of them.

No need for them in the pool itself, though. The pool floor has a few stones and a touch of seaweed, but it is largely soft underfoot if you need to stand.

The ‘men’s baths’ are on the beach/rock platform just to the north of the Continental Baths. If you’re stuck for a parking spot, I usually find it easier to park at the southern end of Stuart Park and walk back to the pool.

You have to walk across the rocky platform from the coastal path to get to this pool. Once there, you have a main set of steps that go vertically down into the pool itself.

You need to refine your towel technique at this pool; there’s no out-of-sight spot really unless you crouch under the stairs down from the path. There is a shower, though, against the cliff wall to the south of those steps. It runs warm for about 3 seconds but then runs cold. If you need proper changing facilities, best to go back to the Continental Baths, 300m away.

Optimum time to swim is probably 2-3 hours after high tide.

At high tide, even on a calm day, every wave washed over the wall and will make for a fun but turbulent swim. I wouldn’t go near this pool on a stormy day at high tide!

At low tide, it is possible to swim but the water gets pretty low once the tide is fully out.

This was one of the earliest rock pools built down the NSW coast. It was first formed in 1881 and held its first swimming carnival in 1896.

For many years it was the Men’s Baths, in that era of swimming/bathing when it was not done to mix genders. There was the Nun’s Pool off the end of the headland where the lighthouse is; that is now disused.

It’s still known as the Men’s Baths to locals, but anyone swims there these days…even if on the second time I was here, I did only meet men swimming there!

Bob, a Scotsman who’s been in Australia since 1968, and clearly comes down here regularly, judging by the cheery hello he got from all the others down there that morning. He was a professional footballer in his day, but that’s another story…

Two brothers in their 80s, who didn’t give me their names but said they came from a family of 8 kids and they all learnt to swim in this pool when they were children back in the 1940s. They’re still going strong, though only one of them took the plunge on the day of my visit.

In 2014 Swimming blogger Sally visited both Wollongong pools. She focused on the Continental Baths but mentioned the ‘Men’s Baths’ at the end.

Directly above the pool on Cliff Road are two coffee shops side by side. I liked them both.

Blu Orange – is the new kid on the block, having only opened in 2014. They use a coffee roasted by Chachis, a smaller local roaster.  I like the colour scheme here. Open daily from 7am.

Aqua: they use the better known Toby’s Estate and they bake their own cakes, muffins and other nibbles to have after your swim.  Aqua is open daily from 6am to 3pm (but open also for evening meals)

Both have fantastic views looking out to sea (though over the road). 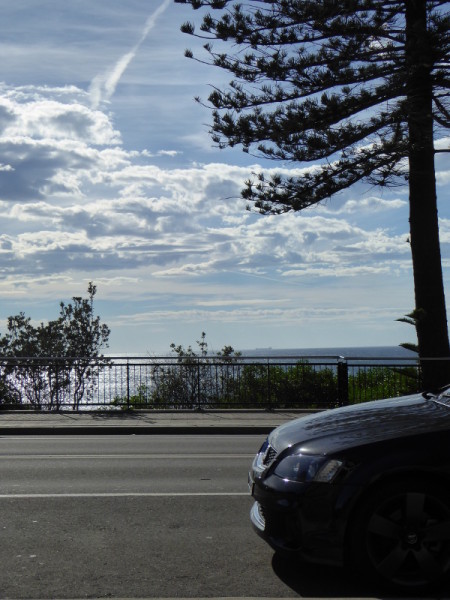 Aqua seems more popular with groups of cyclists, so if you like the lycra this is for you; if you like it a bit quieter, go for BluOrange.

For the best coffee in the area (in my view, anyway), I say it’s worth going the extra mile to:

Behind 135 Crown Street (down the alleyway to the left of number 135).

Otherwise open from till 3pm (1pm on Saturdays)

Some say this is the best coffee in Illawarra; others have compared it to Sydney’s best. It is certainly worth the mile or so walk from the baths, because these guys really care about the quality in their coffee and love to talk about it. Also great toasted banana bread (and pear and raspberry worth a try too).

There’s seating inside but also a terrace out the back, and lots of coffee paraphernalia for sale if you want to try this at home!